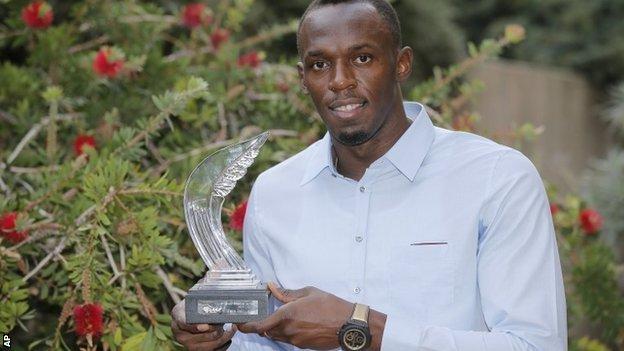 Usain Bolt has been named male World Athlete of the Year for a fifth time.

The 27-year-old Jamaican, who also won last year, clinched 100m, 200m and 100m relay gold in the World Championships in Moscow in August.

Earlier this week, the 27-year-old said she will refuse to run in major events unless Jamaica's athletics authorities "stand by" their athletes.

Bolt, who beat Britain's double world champion from Moscow Mo Farah to the award, became the most successful athlete in the history of the World Championships this year with his eighth gold and 10th medal in total.

"The 200m is much easier than the 100m to try for a record and that would be my main focus this season."

Bolt has previously said he could retire after the 2016 Olympics - but he added he might yet compete at the World Championships in London the following year.

"I was having some talk about this with my coach, and he was saying people had said I should go for another year," he said.

Fraser-Pryce has now won seven medals at World Championships to add to her four Olympic medals.