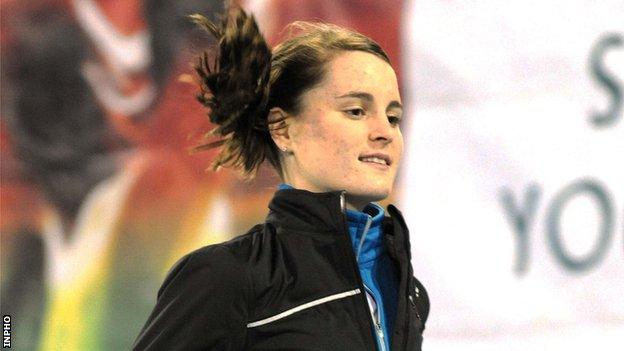 Ciara Mageean believes there is "more to come" in her athletics career but this year's Commonwealth Games may come too soon for the Portaferry athlete.

"I'm not setting any timeframe but hopefully I will have a few races over the summer," Mageean told BBC Sport.

The county Down woman's outstanding junior career was highlighted by a remarkable 1500m silver medal at the 2010 World Junior Championships which came a year after taking 800m silver at the World Youth Championships.

Those performances marked out Mageean as the most exciting Irish middle distance prospect since the emergence of Sonia O'Sullivan in the late 1980s.

In 2011, Mageean again took silver at the European Junior Championships before running an Olympic B 1500m standard of 4:07.45 later in the summer.

At that stage, the Northern Ireland woman looked in contention to secure a place at the London Olympics but Mageean struggled for form in 2012 as the ankle problem began to become a major irritant.

After missing out on the Olympics, Mageean was absent for the entire 2013 season before eventually undergoing surgery in the autumn.

"I'm doing a lot of rehab with Emma Gallivan and at this stage, it's quite early days with no training load," added Mageean, who is now coached by Jerry Kiernan.

"So far, it has been going well and there has been no pain in the ankle from the rehab work that I've been doing.

"But I'm reluctant to talk in terms of timeframes. The aim is to get back to running pain free and it's really a case of one day at a time at this stage."

The Commonwealth Games 1500m heats will take place on Monday 28 July with the 800m first round three days later.

Despite the uncertainly over when Mageean will step back into the competitive arena, the county Down woman is convinced that she will return to the sport.

"I'm confident that I will be back and when that happens, I'll be as hungry as ever to achieve success but I'm not setting any specific goals at this stage."