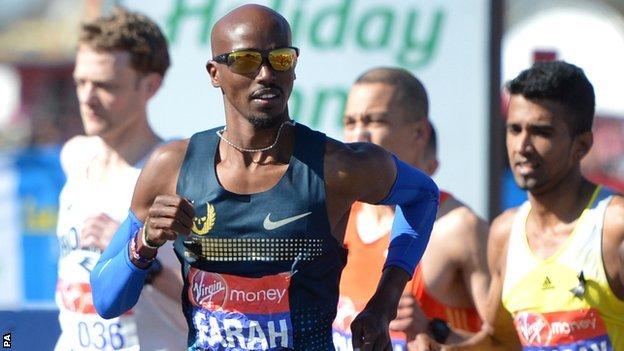 British double Olympic and world champion Farah ran half the race in 2013 and will make his full debut in the event on 13 April.

The 30-year-old will also face Olympic and world marathon champion Stephen Kiprotich over the 26.2-mile course.

"I am expecting it to be one of my toughest races and a real learning experience," said Farah.

Following his appearance in half of the 2013 London Marathon, he also won both titles at the World Championships in Russia last August.

Kenenisa Bekele is the only notable absentee, with the Ethiopian set to make his marathon debut in Paris on 6 April instead.

"I gained a lot of valuable experience running part of the course alongside the top guys last year and can't wait to race over the full distance this April," said Farah.

"The London Marathon always attracts the world's best runners to its elite fields and this year will be no different.

"I had another great year on the track in 2013, but the marathon is my main focus for this year."

BBC Sport athletics commentator Mike Costello said this year's marathon will be "one of the toughest challenges" of Farah's career.

"It demands a greater level of concentration, training and physical demand on the body.

"It is into unknown territory as far as he is concerned.

"Against a field of this calibre it will be as tough an ask as anything he has taken on in his career so far.

"It will generate a buzz around the race like the London Marathon hasn't known in its three decades of existence.