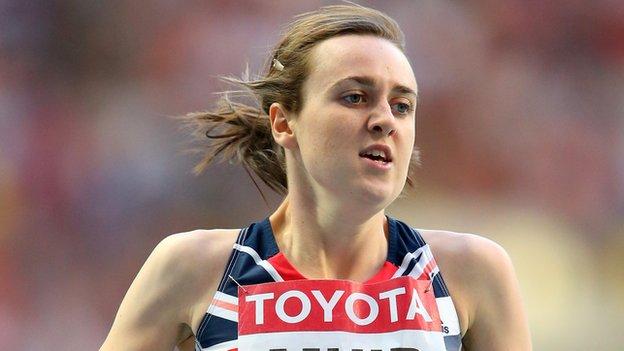 Laura Muir and Allan Smith will both face opposition from compatriots in Saturday's Glasgow International Match.

David Smith had been chosen along with Gibson for the Commonwealth Select.

The two high-jumping Smiths will be up against training partner Robbie Grabarz, who will represent Great Britain and Northern Ireland.

The likes of Laura Muir, Eilidh Child, Chris O'Hare, they are as good as anything in the US or the British teams

Jamie Bowie has been given the chance to build on

The 24-year-old's time of 47.09sec at Saturday's National Open in the same venue was the second-fastest Scottish men's indoor 400m of all time.

Having taken more than half a second off his personal best, Bowie will go into the match full of confidence as he faces eight-time global medallist Chris Brown, the Bahamas sprinter representing the Commonwealth, and Nigel Levine, the semi-finalist at the world championships in Moscow being in GB&NI colours.

Guy Learmonth also returns to the Emirates after the 21-year-old got his season off to a winning start in the 800m at the weekend.

Moscow 1500m finalist Chris O'Hare will be looking to continue from where he left off in 2013, during which he raced to a Scottish indoor record of 3:37.25.

Scottish Athletics director of coaching Stephen Maguire thinks it will prove to be a great help in preparing his squad for this year's Commonwealth Games in Glasgow.

"It will be a massive experience for the Scotland team," he said.

"It will be a sold-out Emirates Arena and gives the team an opportunity to compete in front of a Scottish crowd and that is great preparation and that's the way I'm looking at it.

"The Scotland team gives the event a different dynamic.

"When you actually sit down and think about it, you look at the likes of Laura Muir, Eilidh Child, Chris O'Hare, they are as good as anything in the US or the British teams."