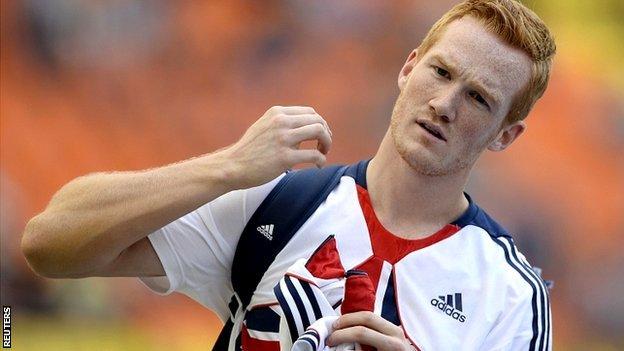 Olympic long jump champion Greg Rutherford has been forced to delay the start of his 2014 season after picking up an unspecified injury in training.

The 27-year-old has withdrawn from the Great Britain team for Saturday's Glasgow International Match.

Rutherford, who jumped 8.31m to win London 2012 gold, expects to return for the Birmingham meeting on 15 February.

"It has been a tough call to make, but I know it's the right decision in order not to risk a serious injury," he said.

"It's nothing bad and my appearance in the long jump at the Sainsbury's Indoor Grand Prix next month won't be in danger," he continued.

"Even if I can't make it to Glasgow this indoor season, I'll be back this summer and will fight for the long jump title at the Commonwealth Games in Glasgow."

Rutherford endured a difficult 2013, splitting with his coach Dan Pfaff, losing his sponsorship deal with Nike and failing to make the final of the World Championships in Moscow after suffering a hamstring tear in the run-up to the tournament.