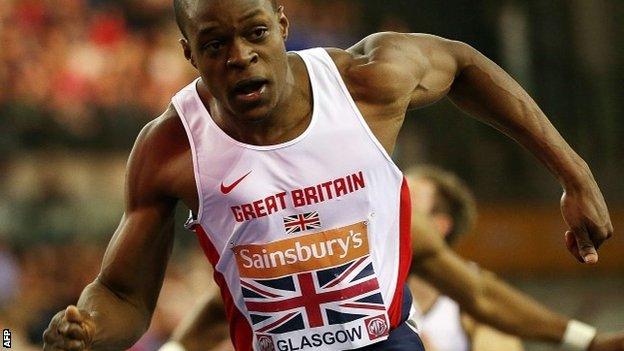 James Dasaolu easily won the men's 60m at the Glasgow International Match as the United Kingdom, minus Scotland, finished second in the four-team event.

Hosts Scotland were beaten into fourth place by the United States, despite Laura Muir breaking the national record in the women's 800m.

There were also victories for Holly Bleasdale in the women's pole vault and Asha Phillip in the 60m.

Laura Muir's national record of 2:00.94 - the sixth quickest indoors time by a British woman - was impressive.

"Laura ran the 800m with real maturity. I think the crowd lifted her. She didn't panic, waited her time and down the back straight she probably knew she had it won."

But the 20-year-old student, who overtook America's Chanelle Price on the final lap, was not surprised by her quick time.

"I'm so happy I could do it for this crowd. I did a 400m at the start of the year, which I got a personal best in, so I knew my speed was good and training was going really well."

Captain Eilidh Child (53.69) was unable to produce a winning performance in the women's 400m, finishing fourth as Francena McCorory (51.79) claimed the maximum four points for the United States.

"I went a little bit too hard and died a death," said 26-year-old Child. "I'm just going to keep doing more indoors and aim for the World Indoor Championships."

Those championships start on 7 March in Sopot, Poland.

"6.60 is what I opened with last year so I'm obviously in a better place than I was this time last year," said Dasaolu, who dipped ahead of Commonwealth runner Dwain Chambers (6.61).

European indoor champion Bleasdale, who missed last year's World Championships with back and Achilles problems, made a winning start to the season, earning four points for her team with a 4.62m vault.

"Last year I was really nervous every time and wasn't really enjoying it. It wasn't a good place to be whereas now I'm really happy. This year I'm happy to be back."

It was a photo finish in the men's 60m hurdles with a hundredth of a second separating Britain's captain William Sharman and eventual winner Jeff Porter of the United States. Sharman's run of 7.67 was a personal best.

Britain's Tiffany Porter (8.32), who is married to Jeff Porter, was unable to match her husband's achievements, trailing American Nia Ali in second in the women's 60m hurdles.