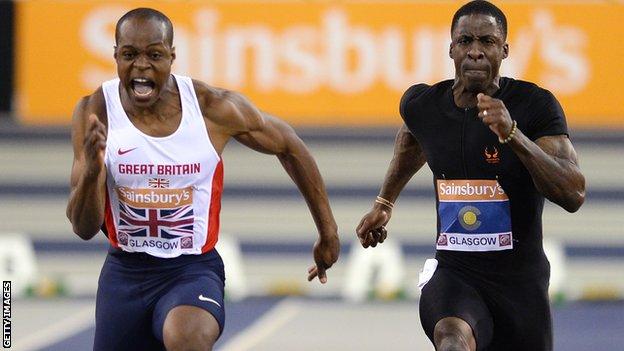 James Dasaolu believes Dwain Chambers' time as a force in British sprinting has been and gone.

The pair meet in the 60m at the Sainsbury's British Athletics Indoor Championships in Sheffield on Saturday.

Dasaolu, 26, will go into the race as defending champion and beat Chambers, 35, in Glasgow last month.

"I think the time may have come where he's not going to be so much at the forefront of British sprinting any more," Dasaolu said.

"It's not down to me to write anyone off, because you get the likes of (37-year-old) Kim Collins, who's still run 6.55, but there will be other names coming through."

"Sprinting's looking very promising so we don't have to rely on the likes of Dwain to take the mantle any more, with all respect to him."

Chambers, who is a five-time British champion, is ranked only joint fourth in the 60m Britain this year with 6.61, behind Safo-Antwi and Rion Pierre and level with teenager Ujah.