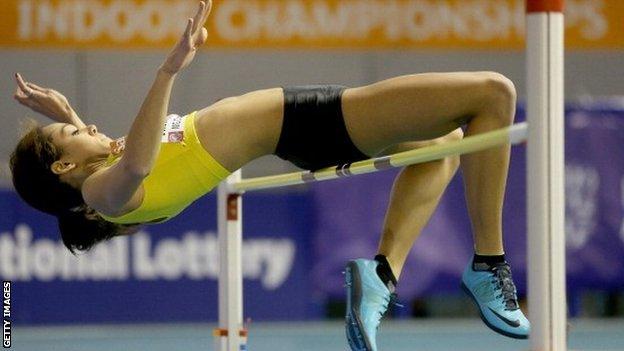 The 21-year-old cleared 1.96m in Sheffield to beat a record which had been held by Debbie Marti since 1997.

James Dasaolu defended his men's 60m title, crossing the line in 6.50 seconds to finish three hundredths of a second ahead of Dwain Chambers.

There was a personal best - and a stadium record - for Asha Philip as the 23-year-old retained her 60m title with a 7.09-second finish.

William Sharman and Andrew Pozzi could not be separated in the men's 60m hurdles and, after a lengthy review, the race was declared a dead heat.

The two athletes dipped home in 7.64 seconds, with Sharman - fifth in the 110m hurdles at last year's outdoor World Championships in Moscow - achieving a personal best.

Both Sharman and Pozzi are expected to be selected for next month's World Indoor Championships in Poland after British Athletics announced that gold medallists in Sheffield who also achieve the qualifying standard would be chosen for Sopot.

Dasaolu secured his place in the British team for Poland, recovering from a bad start to clock the second fastest time in the world this year.

He will be one of the favourites for gold as only Cuba's Yunier Perez has run quicker over the distance this year, and by only 0.01 seconds.

"All today was about was doing three rounds in one day, coming through unscathed, booking my place on the plane, and defending my British title so I'm happy," said Dasaolu, who was by far the slowest out of the blocks of all the finalists.

"It's not the greatest start, but Poland is 30-odd days away. Everything else I will get right come Sopot and hopefully pick up a medal. I know there is more in the tank."

Liverpool Harrier Johnson-Thompson is expected to compete in the pentathlon in Poland and will compete at the Dutch Championships next week in a bid to qualify for the event.

"I knew I was in good form because I had a good session in Loughborough last week and had a really good high jump session."