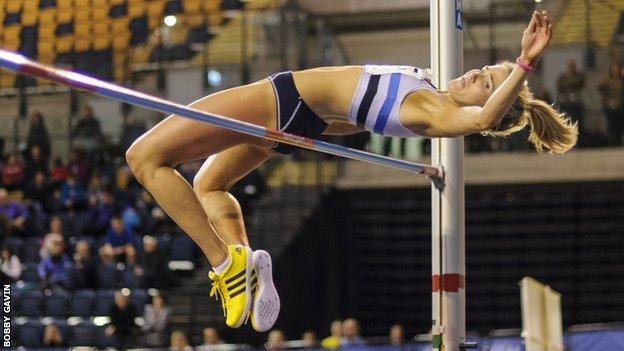 Jayne Nisbet leapt to a new Scottish indoor record in the high jump with a clearance of 1.87m at the British Indoor Championships in Sheffield.

The Edinburgh AC athlete took the silver medal behind

"I'm really happy with the new record but I'm annoyed at myself because I was so close to 1.90m," said Nisbet.

"I really want to go back out there and jump again."

Nisbet started the 2013 season in great form before an injury in the gym cut short her season.

With Emma Nuttall having reached 1.86m indoors this winter, and Rachael MacKenzie at 1.80m at the Senior Indoor Championships last weekend at the Emirates, there is a feel-good factor in the event in Scotland.

Nisbet added: "Katarina was amazing and so good to watch. It's probably the best British championships there has been in years, so to be a part of it was really good."

Both Nisbet and Nuttall have already been selected by Team Scotland for the Commonwealth Games and the Edinburgh AC team-mates will line up at Hampden.

"It was a good day's jumping by Jayne and she looked in very good fitness coming back from the injury last summer to get that well-earned PB," said Stephen Maguire, scottishathletics director of coaching.

"She actually went very close to 1.90 on the second attempt. She started 2013 well and then had that set-back so credit to her coach, Graham Ravenscroft, and her strength and conditioning coach, David Parker, for the work they've done as well as Jayne.

"She is in great condition now and these are exciting times for Scottish high jumping.

"We've a couple of really promising guys there in David Smith and Allan Smith and if you look at men's and women's the overall standards are improving.'

In the men's high jump, there are now four men at 2.09m or above in the Scottish rankings following PBs last weekend by Robert Ferguson and Jack Lochans to join the Smiths while Scottish-based American Ray Bobrownicki (who cleared 2.17m at the Seniors last Sunday) will count as a fifth if his British passport application is successful.

Five years ago there were five men bracketed between 2m and 2.05m.

Meanwhile, Jax Thoirs delivered a 5.50m performance in the pole vault in an indoors event in New Mexico which, subject to ratification, will equal his own outdoor Scottish record in that event.

Maguire added: "Jax has done well, too, over in New Mexico by all accounts and I think we're really seeing him develop as an athlete now.

"He's still only 20 years old but, like a number of Scottish athletes, he is starting to convert his potential. Of course, that is the real trick - the conversion from promising teenagers to top performances at senior level."