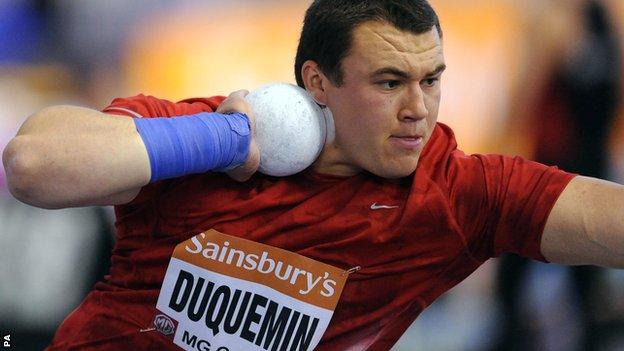 Jersey shot-putter Zane Duquemin said he was unhappy with his display at the British Indoor Championships, despite winning his first senior British title.

The 22-year-old threw 18.31m to take the title in Sheffield at the weekend.

"I'm pretty pleased with the win but in performance terms I'm not very happy at all," he told BBC Radio Jersey.

"I don't really look at myself on a British scale. I'm looking to get up there with the world's best and 18.31m isn't really going to cut it."

Duquemin, who is lottery funded as part of the 'podium potential' programme, said he is going to have to surpass his personal best of 19.42m to compete at international level.

"I know I'm in much better shape than that," added Duquemin, who was 76cm clear of his closest rival in Sheffield.

"I didn't expect to be as rusty as I was in my first competition of the year, but I'm happy to take the win. It is my first senior British title, which is something I've been aiming for, for a long time.

"But I'm the kind of person who always looks forward to the next goal, which is trying to break the 20m barrier and get up there with the world's best.

"It's a good start and the Commonwealth Games is the main aim and that's where I'm planning to peak. Hopefully I'll be in 20m shape come the Commonwealths and in with a chance of a medal."

Jersey, who compete as a separate team at the Commonwealths, are seeking their first medal since 1990 and Duquemin said he was doing everything in his power to end the wait.

"I'm doing all I can," he said. "I think 19.99m won the bronze medal in Delhi and if everything goes to plan I'll be in 20m shape when it comes to Glasgow.

"But the standard has jumped up massively on the last four years. There are a lot of guys who have really stepped up from Canada, Jamaica and Australia but it all depends on what happens on the day."

Meanwhile, Jersey athlete Elliott Dorey finished third in his 1500m heat in Sheffield, just missing out on a place in the final.