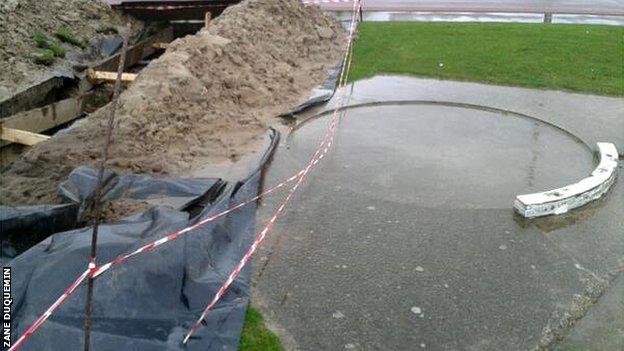 Jersey shot-putter Zane Duquemin may have been expecting a warm reception on his return to the island after winning his first senior title at the British Indoor Championships at the weekend.

But upon arriving back at FB Fields to resume training he found a mini-building site next to his throwing circle, the only one on the island, complete with a several-feet-deep hole and large mound of earth.

"I was pretty surprised," the 22-year-old, who tweeted a picture of the work accompanied by the hashtag 'fuming', told BBC Radio Jersey.

"They're planning to put some new pipes in, but it basically means I can't throw because I'd end up in the mound of dirt.

"Nobody told me anything about it which is a bit disappointing, because it would have been nice to know. If I'd known in advance I would have probably stayed in London for the week and trained over there.

"It is frustrating but I've trained at a lot of tracks in my time and every place seems to have its own little issues.

"It's just one of those things and you just have to deal with it and move on as best as you can."

Duquemin said the ground staff at the track had assured him it would quickly be repaired, allowing him to continue his training programme as he builds towards this year's Commonwealth Games and his aim of breaking the 20m mark.

He said he would be doing a gym session on Wednesday, but hoped to be able to resume throwing on Thursday ahead of a competition in Gothenburg at the weekend.

"It's not ideal but we are a small island - we only have one athletics track and we are trying to find somewhere for another circle for the summer so hopefully we can get something sorted," he added.

The building work at the athletics track is part of a plan to upgrade facilities ahead of Jersey's staging of the 2015 Island Games.

Duquemin threw 18.31m in Sheffield at the weekend to take the British indoor title, but admitted he was not happy with his performance.

"I've had a few chats with my coach and we've agreed that the win was the most important thing," he added.

"Distance-wise it wasn't what we were looking for but we're pretty confident I'm still in good shape and hopefully I can get some big distances in Gothenburg."