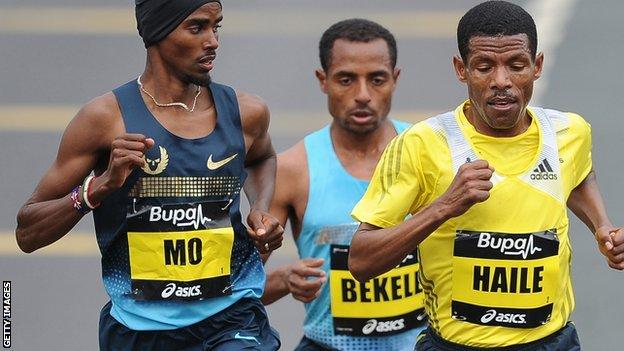 The Ethiopian, 40, clocked two hours, three minutes and 59 seconds in 2008 and will attempt to take the field to the 30km mark at world record pace.

"I'm going to do something useful to keep the right pace at the right time to attack the world record," he said.

Farah, who ran half of last year's race as a training exercise, will make his debut over the full 26.2-mile distance this year.

London race director Hugh Brasher said: "With Haile pacing and four of the fastest marathon runners in history in the race, there's a real chance we will see something special."

Last year's London Marathon winner Tsegaye Kebede of Ethiopia will also compete, as Farah, 30, attempts to become the first Briton to win the race since Eamonn Martin in 1993.

"In his first marathon, [Farah] doesn't need to win or run a fast time, but learn about the distance," added Gebrselassie, who moved up to marathon distance from track at 29.

"He can do what he wants in his second or third marathon. I only ran 2:06 in my first one and after that I returned to the track as it was too early.