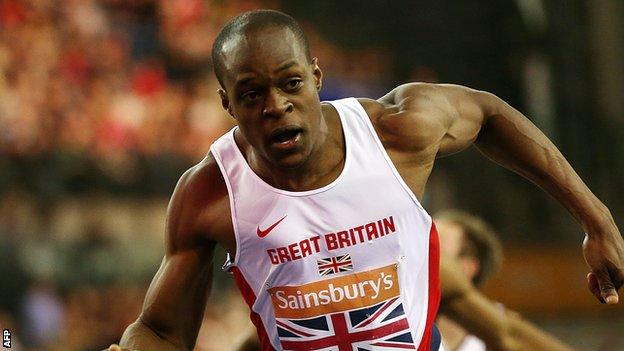 British sprinter James Dasaolu will miss the World Indoor Championships because of a slight hamstring tear.

The second-fastest Briton of all time was to compete in the 60m in Poland but suffered the problem during Saturday's Birmingham Indoor Grand Prix.

"Been a good indoor season but I will be missing the World Indoors and focusing on being fully fit for the outdoor season," he said on Twitter.

Meanwhile, Katarina Johnson-Thompson will only compete in the long jump.

The International Association of Athletics Federations did not grant the 21-year old an invitation for the pentathlon after she pulled out of the qualifying event with illness.

Johnson-Thompson qualifies for the long jump after setting a personal best in the British Athletics Indoor Championships in Sheffield earlier this month.

Dasaolu, who clocked 9.91 seconds for the 100m at the British Championships in 2013, clutched his left leg after winning the Sainsbury's Indoor Grand Prix.

In a statement released via British Athletics, the 26-year-old said: "I am disappointed but this is going to be a big year and I don't want to take any risk at all. I will now concentrate on being 100% fit for the outdoor competitions."

Britain have named a 35-strong team for the World Indoors, which take place from 7-9 March in Sopot.

Laura Muir, the world number one at 800m, and pole-vaulters Holly Bleasdale and Luke Cutts have all been included.