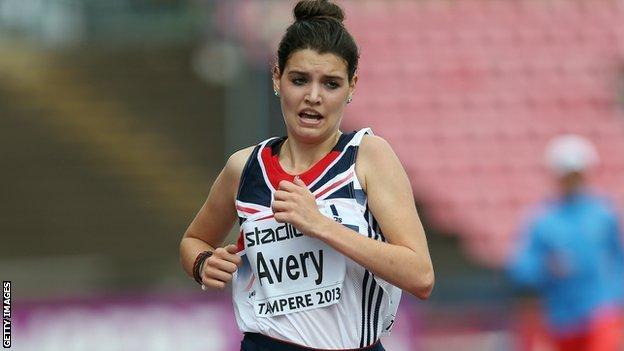 British 3,000m runner Kate Avery says she was not selected for the World Indoor Championships because she did not ask for permission to miss the trial in Sheffield on 8 February.

But the 22-year-old, who lives in New York, says British Athletics only contacted her on 15 February to ask whether she wanted to be considered.

Kate Avery is 24th in the 2014 3,000m world rankings, but the 15th-fastest eligible entrant for the World Indoors. That is because countries are limited to selecting two athletes per event

"If I had to have emailed them more than a week before [to ask to miss the British trials], why get in touch? I don't understand," Avery told BBC Sport.

Less than 48 hours after first contacting her, British Athletics told her she could not be considered.

"I felt really overwhelmed to be asked if I wanted to be selected," she said. "The World Indoors weren't in my plans but I think you can't really turn that down."

The Durham athlete is currently at university in the USA and in November became the first British woman to win a medal at the National Collegiate Cross Country Championships.

That performance for Great Britain Under-23s at the European Cross Country Championships,

This year, she is ranked first in Britain by more than four seconds at 3,000m with a time of eight minutes 56.20 seconds.

Eilish McColgan is the only Briton selected for the women's 3,000m in Poland next month. The Scot, who was also absent from the trials, ended 2013 with a best of 8:47.79, but has not raced since 22 September.

"I had an email on Monday asking if I could ring one of the selectors and I was excited thinking it was just about the details," Avery continued.

"But it was to say I could not go because of failing to get permission to not run the trial. But it was them who asked me if I wanted to be considered, not the other way around.

"Then to not be picked and see that there's a space, and also that the person who has been picked didn't run the trial is really tough to take."