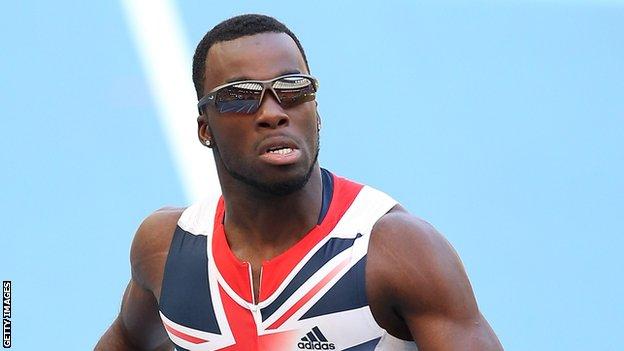 British sprinter Nigel Levine has said he is happy to let his opponents worry about his form going into the World Indoor Championships.

The 24-year-old clocked the fifth-quickest 400m indoor time in the world this year while winning at the British Grand Prix last weekend.

"To be a threat is a good thing," the Bedford athlete told BBC Look East.

"But I'm going to watch what I do. I can't watch what they do. If they're watching me - that's up to them."

Former European Under-23 champion Levine, who is coached by 1992 Olympic 100m champion Linford Christie, is part of the British team that will travel to Sopot, Poland for the World Indoors between 7-9 March.

His time of 45.71 seconds in Birmingham last week matched his personal best indoors and is much quicker than the 46.46 he recorded under the roof at the worlds in 2012.

"My target is to do better than two years ago," said Levine, who was part of the British team that won 4x400m relay silver at the same event.

"Things are going great this year, so bring it on and we'll see what happens.

"Being on the podium would be a great stepping stone towards the outdoors and a great confidence boost."