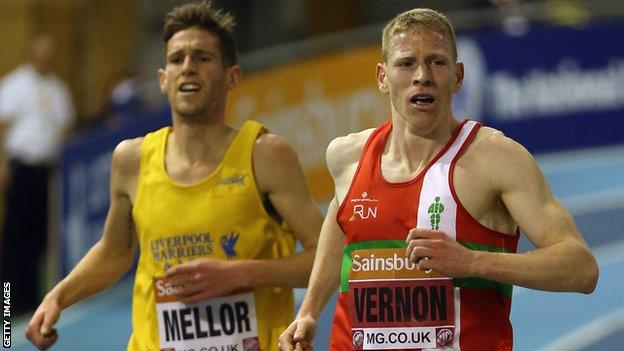 Andy Vernon is targeting a place in the 3,000m final after being named in the Great Britain team for next month's World Indoor Athletics Championships.

The Fareham athlete is confident he will put his 10th-placed finish at the Sainsbury's Indoor Meeting in Birmingham last weekend behind him.

Vernon told BBC Radio Solent that Birmingham was "one of those races".

Going into this year, I have a decent chance of getting a medal in the European Championships and the Commonwealth Games as well

"At least I've got it out of my system and hopefully, come the World Indoors, I'll be better," the 28-year-old said.

"My main aim is to make the final of the Worlds and, barring the blip I had last weekend, it's looking good.

"You want to keep your training at a high enough level and just taper enough for what you need to do, but it isn't always easy to judge that.

Vernon is hoping to use the World Indoor Championships as a springboard into the outdoor track season.

He explained: "The main reason I'm doing the World Indoors is for experience to take me on to the outdoor season.

"I've had some harsh decisions in selection over the years, so haven't got as much experience as I might have at this stage of my career, and I'm trying to build that up.

"But going into this year I have a decent chance of getting a medal in the European Championships and there's the Commonwealth Games as well."