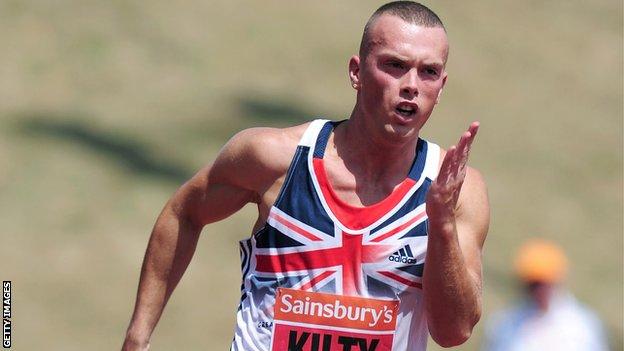 Richard Kilty wants to show he deserves a place in the World Indoors 60m.

The 24-year-old now collects his first senior GB vest as an individual, having previously been named in relay squads.

Richard Kilty will represent Great Britain in the 60m alongside Dwain Chambers. Both men have a season's best of 6.53 seconds, the same as Joseph Morris, Nesta Carter and Kim Collins.

"For James, injury close to the Worlds is a nightmare, but I focus on the opportunity to prove myself," he said.

Dasaolu currently tops the world rankings with a time of 6.47, but Kilty is not far behind as his season's best of 6.53 ranks him eighth going into next month's championships in Poland.

And the Teesside sprinter beat French duo Christophe Lemaitre and Jimmy Vicaut, and American Mike Rodgers last Saturday, all of whom have broken the 10-second barrier over 100 metres.

"I've shown some some consistency this season and I was fairly pleased to beat some world-class athletes last weekend," Kilty told BBC Tees.

"I think I can run sub 6.50. I was a little fatigued in Birmingham on Saturday having raced three hard rounds in the UK trials the weekend before.

"There are little things to improve on technically in terms of being a little tense, and leaning for the line a little too early.

"If I can run that perfect race, there's so many guys within a couple of hundredths that I think I can go to Poland and win.

"But that's the case for a lot of athletes. My first target is make the final as then anything can happen."