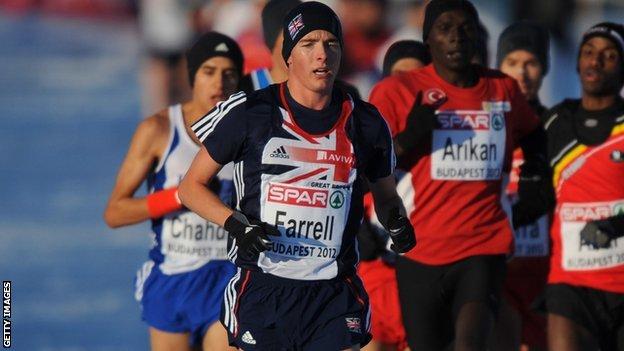 Tom Farrell says missing out on the World Indoors 3,000m this weekend "could be a blessing" for this summer.

Farrell's time of seven minutes, 47 seconds in Birmingham last month was inside the the Worlds qualifying mark.

But the 22-year-old failed to secure a top-two finish at the trial race a week previous, so was beaten to selection.

"As annoying as it is to miss out, with the Commonwealth Games and European Championships this summer it might be better long-term," he told BBC Sport.

The Cumbrian's performance at the Birmingham Grand Prix saw him improve his personal best by four seconds and ranks him fifth in Europe this season.

Two of those ahead of him are Britons Lee Emanuel and Jonny Mellor, who will compete at the Worlds in Poland over 1500m and 3,000m respectively.

Andy Vernon, who won the trial in Sheffield on 8 February, takes the other 3,000m slot.

"It's great to see British guys doing so well at the moment and they were right to be picked ahead of me," Farrell continued.

"Personally, I've taken a lot of confidence from the indoors as it was a last minute decision to do those races.

"My training for the block before Poland has been a lot different than if I'd be selected. It's given me the chance to knuckle down and prepare for the outdoor season."

For this summer's Commonwealth Games, England Athletics' 'A' standard is 13:03.

In British history, only Mo Farah and David Moorcroft have ever achieved that mark.

In December, in Belgrade, and two weeks later graduated from Oklahoma State University.

Since graduating, he has temporarily basing himself back in his hometown of Carlisle.

"The plan is to move back to the United States and join a professional training group," he explained.

"I'd like to get it all sorted as soon as possible as I'd expect some sort of transitional period when I do eventually move.

"But there's no real rush as I'm going to need to be back to Europe from mid-May because of the championships this summer.

"Choosing the right group is not just for this season, but my whole career - it's a huge decision."