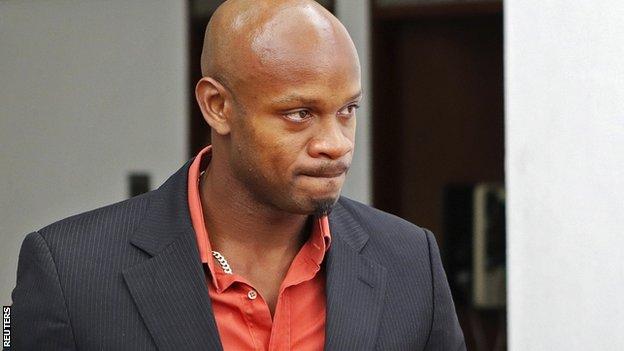 Former 100m world record holder Asafa Powell will not find out until 10 April what ban, if any, he is to serve for a failed drugs test last year.

The Jamaican, 31, tested positive for banned stimulant oxilofrine in June 2013 and faces up to a two-year ban.

In final submissions in Kingston on Wednesday, his legal team appealed for leniency for what is a first offence.

Sherone Simpson, who failed a test at the same event, will receive her verdict on 8 April.

Both Powell and Simpson, who were provisionally suspended in July, argued for the minimum suspension, on the grounds of minimal fault.

However, Jamaica's Anti-Doping Commission lawyer argued that they were negligent and had blindly trusted the physical trainer whom both blame for their positive tests.

During an earlier hearing in January - adjourned until this month after it overran - the court heard that Xuereb was also administering Powell's anti-inflammatory injections and Vitamin B12, despite not being certified as a doctor, massage therapist, chiropractor or physiotherapist.

Along with Simpson - a silver medallist in the 4 x 100m relay at the London 2012 Olympics - Powell was among five Jamaicans to test positive at the Jamaican National Championships in June of last year.

At the time, he said checks done by his team "told us the supplements were fit for consumption by professional athletes".