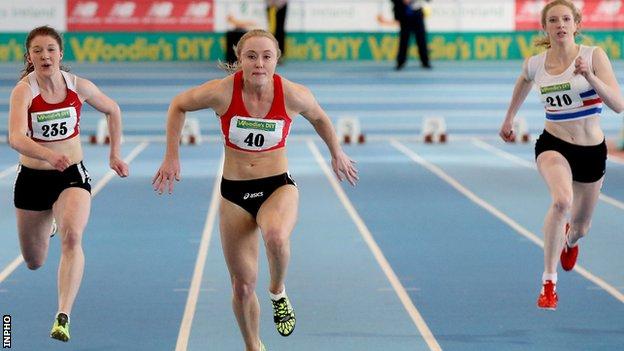 Foster's 60m win in a personal best of 7.32 at the Irish National Championships met the entry standard.

She said after the race that the Poland event was not on her radar as she focuses on the Commonwealth Games.

Ballynure's Katie Kirk won the 800m in 2.03.58 at the Athlone IT Grand Prix on Wednesday night, good enough to qualify for the Commonwealth Games in Glasgow.

"Regrettably I'm unable to take my place on the team to Poland," said Foster.

"Qualifying for the Commonwealth Games ends in June so I need to be in peak condition for outdoor racing in mid-April.

"I'll have the European Indoors in Prague as a major goal for 2015. I wish my team-mates every success in Poland."

The five-strong Irish team is headed by Donegal's Mark English, who has one eye on a place in the 800m final after setting an Irish indoor record earlier this month.

Rose-Anne Galligan and Ciara Everard will also race over 800m while David McCarthy and Claire Tarplee go in the 1500m.

The American wrapped up his preparation for the defence of his world indoor title by clocking 6.69 to etch his name on the futuristic arena's record board.

"I love this arena and coming to Ireland" Eaton said after taking long jump bronze behind Britain's Daniel Bramble, who won with a best of 7.71m.

"The crowd were great here, they really got behind us.

"The track is ultra fast and makes for great running. I'd love to come back to Ireland and compete again."