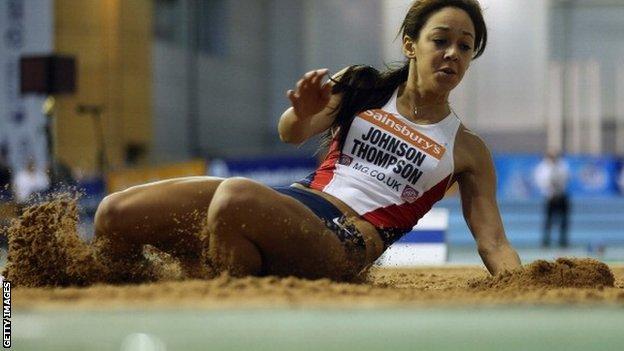 There comes a time in everyone's life when they have to leave behind the carefree days of youth and turn dreams into reality.

Katarina Johnson-Thompson, the latest in the conveyor belt of British heptathletes, has grown up knowing a tidal wave of expectation would hit her one day and she knows the surge is coming now.

The demands on her could increase after this weekend's World Indoor Championships should the 21-year-old win a first senior international medal. She is competing in the long jump, having failed to qualify for the pentathlon due to illness.

Regardless of what the British junior heptathlon record holder achieves in Sopot, Poland, interest in the progress of the first in line to the throne Jessica Ennis-Hill temporarily abdicated for motherhood will continue to grow as momentum builds towards this summer's Commonwealth Games.

"She has to step up at some point," says her coach Mike Holmes in a manner which suggests both he and his athlete are prepared for what will come their way in the next few months and years.

KJT - the success story so far

"The Commonwealth Games is an ideal stepping stone. There is hardware to be won and it's only reasonable that, if she progresses as she should and tries to emulate Jess, she should have a good bash at winning a medal and maybe push for gold at the Commonwealths.

"We're not going to shy away from that. You can only be a promising junior for so long."

For all the coming-of-age talk of breakthrough summers and senior medals, the swell of interest is unlikely to crush the ebullient Liverpudlian.

Smiling broadly with a group of male sprinters after an 80m dash to the line during a training session at her home track, she appears unfazed and unaffected by the presence of three cameramen and several journalists following her every move.

The Liverpool Harrier's easy-going demeanour only slips a little as she ponders what could have been in Poland this weekend after a "weird" last few weeks.

There was the, well, high of breaking the British indoor high jump record, then the low of pulling out of a pentathlon contest in the Netherlands after the first of five events; her final chance of securing a World Indoor spot in her favoured multi-disciplined event ruined because of a throat and chest infection.

What would have happened had she not become ill, struck down because it felt like someone had "snuck a cactus" in her throat? Would she have qualified for the pentathlon in Sopot? Probably. Could she have been a contender? Definitely.

Johnson-Thompson, fifth in the heptathlon at last year's World Championships, says she reacted just like many would to an awkward situation: replaying scenarios in her mind, dwelling on it, wishing she had done things differently.

"It's like when someone experiences an embarrassing moment and they're walking around, thinking about it," she explains, sniffling, the remnants of that ill-timed cold still lingering.

"I was thinking about it, hoping I was going to get a wildcard. I was holding out for that for a few days because I've been working the whole winter for it. It was really disappointing."

But this is not the week to mope or sulk. Now is the time to focus on re-jigged goals, such is the joy of excelling at many things.

Johnson-Thompson may not be competing in Poland in her preferred event, but she is still good enough to represent Britain in the long jump (and the high jump, too, though she opted to compete only in the former).

She says she would have been a long jumper had she not fallen in love with heptathlon, an event which fits in perfectly with her indecisive character. She feels comfortable in the long jump. Confident, even. She is, after all, the reigning world junior champion.

"I will be tuned into the pentathlon competition and I will be thinking 'what if' but you can't live your life like that," she admits. "I have to concentrate on the long jump, that's what I'm doing and I'm excited about it."

Expectation does increase when you do big performances, but I put pressure on myself and the only person I can disappoint is myself

And Johnson-Thompson isn't the only one who has had to readjust because, by her side, watching and analysing each time she jumps into a sandpit, is her coach.

"The long jump fraternity have got it relatively easy in my view," says Holmes dryly, joking that life as a long jumper must be quite dull.

"It's a relatively straightforward event. There aren't a lot of technical demands but it's been handy having the long jump as a fall-back. We've really channelled everything into it."

But how realistic is it to expect a multi-eventer, even the reigning British indoor high jump and long jump champion, to shine on the world stage in an individual event?

"I'm not feeling the pressure," says Holmes. "I think if she'd gone for the pentathlon there would have been high expectations because she's always been measured against Jess Ennis, naturally.

"Going for an individual event I don't think they're necessarily expecting a lot, but Katarina is the current junior world champion and so the astute athletics watcher might say perhaps she could, or should, do something in Poland.

"I don't think the long jump is as strong as it has been and if she can get through qualifying then it's not that scary. We'll give it a go. If she does really well it might cause a bit of a surprise. That'd be nice."

Johnson-Thompson has made a habit of astounding people this season. Even her coach admits he has been a "little bit surprised" by his athlete's progress.

On 9 February, she set a new British high-jump record of 1.96m at the British Indoor Championships. It was one way to announce that the ankle injury which hindered her progress in the discipline last year was no longer an issue.

The next day, the Olympian set a personal best 6.75m to secure the British indoor long-jump title and the sport's aficionados, unsurprisingly, began to enthusiastically mention Johnson-Thompson's name alongside that of former Olympic champion Carolina Kluft, a heptathlete without equal in the high jump and long jump.

Describing the recent upsurge in interest in his client, Johnson-Thompson's agent makes a hand gesture akin to that of an aeroplane taking off.

The athlete standing by his side, however, simply continues to carefully unwrap the packaging from a recent delivery of clothes while talk of her rising celebrity goes on around her.

"On the track I guess life has changed because I got the British record but not much has changed off it," says Johnson-Thompson.

"I just see myself doing better in athletics and being happier because I'm doing better. Expectation does increase when you do big performances, but I put pressure on myself and the only person I can disappoint is myself.

"I don't see that as an issue, that I gain people's attention by doing good performances. In Moscow [at the World Championships] I was the only British heptathlete on the track [after Ennis-Hill pulled out because of injury] and I think I handled that well and it looks good for the future. I can go out on the track and just enjoy it."