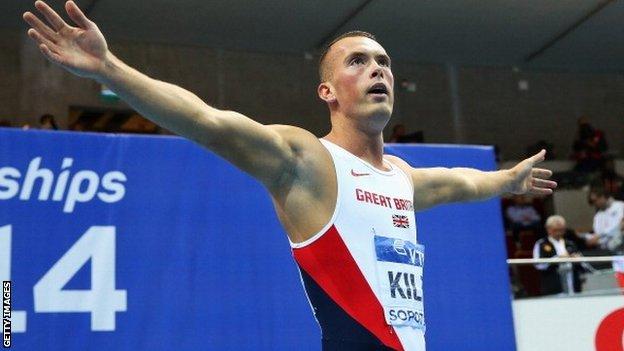 In a world where swagger and confidence are a necessity, Richard Kilty beat his fist to his chest like a super-charged Tarzan as he celebrated becoming 60m World Indoor champion.

The man who bills himself as the "Teesside Tornado" had blown away his more illustrious opponents in a lifetime best 6.49 seconds. He was enjoying the limelight and understandably so after being overlooked by Team GB selectors during the past 18 months.

In the 48 hours that followed his surprise victory, the relatively unknown 24-year-old talked of his "difficult years", of those months when he had no coach, no money and no hope. Now though, he proclaimed, he had "proved everybody wrong".

Kilty speaks about a brighter future, of winning medals and becoming the second white man to dip under the 10-second barrier (after Frenchman Christophe Lemaitre first did so in 2010).

But will his triumph in Poland be the springboard to success in the great outdoors? Can the once-troubled sprinter from Stockton transfer his speed to the 100m, his sport's show-stopping event?

Jason Gardener, the 60m World Indoor champion in 2004, says interesting times are ahead for the sprinter who must now prove he is the real deal.

"He's going to have expectation and pressure put on his shoulders, by himself and by others, because he is world champion," Gardener, one of only four Britons to dip under 10 seconds, told BBC Sport.

"When you are world champion, people want to beat you, but what we have seen from Richard is very impressive. I'm very impressed with how he handles himself.

"What's really important for him, with this new-found recognition, is that he continues to work hard and it's imperative for him to stay healthy.

"It will be interesting to see how he handles this new-found success because people now know who Richard Kilty is. We've known about him in Britain because he's come through as a junior, but on a global level not many people knew much about him."

Medal-winning performances indoors, even a gold at one of the major championships, do not necessarily mean an athlete will thrive on the outdoor track. There could be psychological challenges for Kilty to overcome.

"There's no reason why you can't be good indoors and outdoors," says Gardener, who won Olympic and European relay gold medals during a successful career, but did not win a major individual medal outdoors.

"I had different battles and rational explanations as to why I didn't achieve the same success outdoors. Certainly, in my earlier years, I probably didn't do the necessary training to achieve as much success over 100m in major championships.

"I was extremely quick when running one-off races but my body couldn't cope with putting four world-class races together in championships.

"I had some limitations; some of those were injuries, appropriate training preparation and, looking back, it's fair to say that the frustration at not replicating the indoor success outdoors increased anxiety levels which became psychological challenges as well."

Gardener, who believes his 100m success was also limited because he was competing in an era with a "proven culture of steroid and drug abuse", says sprinters must learn to cope with performing alongside the likes of six-time Olympic champion Usain Bolt.

"In the 100m, you're expected to be out in front at 60m and then the long-legged guys, the good guys, start coming back at you," he says.

"You can get tense and I ran better when I did not put that pressure on myself. But that's all part of the joy and challenges of performing at elite level."

The numbers, at least, are in Kilty's favour. The majority of sprinters (72% of them) who have travelled 60m in under 6.50 seconds have gone on to cover 100m in less than 10 seconds.

"For him to go under 6.50 seconds is quite significant," Colin Jackson told BBC Sport. "He could be joining that sub 10-second club in the summer if everything goes well for him."

Kilty, whose 100m personal best is 10.10 secs, said he will not be making bold statements, but described himself as "very capable" of dipping below the 10-second mark and winning more medals in the coming years.

Thanks to his exploits in the Polish city of Sopot, this son of a former bodyguard can now be regarded as one of Britain's new generation of sprinters, alongside fully fledged members Dasaolu and Adam Gemili.

And Gardener believes it is realistic to expect four British sprinters - Kilty, Dasaolu, Gemili and Chambers - to break the 10-second barrier this summer.

"If I was Richard Kilty I would believe that I was up there with these guys and doing my preparation in the summer to prove I was the real deal.

"It's truly impressive. On the basis of the times he has done, it looks like it's set up for him to run sub-10 seconds.

"The sport has changed massively over the last 10 years, and the support British athletes receive has enabled them to be some of the best prepared in the world."

Dasaolu made headlines last summer by running 9.91 secs for the 100m, the second-fastest time for a British athlete. Of the three, the 26-year-old is the brightest hope at this summer's Commonwealth Games and European Championships, should his fragile body hold up.

Gemili has not run indoors this season, but his personal best of 10.05 secs is 0.05 quicker than Kilty's, while the 20-year-old former footballer recorded a personal best 19.98 secs in the 200m at last summer's World Championships.

But during three high-pressure races in Sopot, Kilty demonstrated he can perform when it matters most, clocking personal bests on each occasion.

"That's a talent in itself, to produce it when it really matters, to stay cool and calm and go out there and rise to the occasion," said marathon world record holder Paula Radcliffe.

Kilty does seem to have gravel in his guts. When everyone around him was basking in the warm glow that was London 2012, he was considering quitting athletics to join the Army.

He was controversially omitted from Britain's squad for his home Olympics despite running an 'A' standard time in the 200m and, by the end of 2012, he had lost his Lottery funding.

For five months his spikes remained in his bag. Unused and unwanted. But, spurred on by his "inspirational" father, Kilty gradually started running again; sprinting along the banks of the Tees and lifting weights in his local gym.

"I was just training by myself, on the streets, on grass, wherever I could," he told BBC Radio 5 live.

His times consequently improved and last October his funding was restored. The sprinter then made the "best decision" of his career to move to Loughborough and join Rana Reider's training group, which includes fellow Britons Chambers and Tiffany Porter.

By the time he triumphantly puffed out his chest over the finishing line in Sopot, his turnaround in fortunes was complete.

But the world champion believes there are "bigger things on the horizon" with the lure of further success at the summer's major outdoor championships.

"Hopefully it is going to be a really great year for me," he added. "The Commonwealths are going to be massive in Glasgow and I am not promising anything, but I think I am capable of qualifying and doing really well.

"I just love competing on the world stage. It's new ground for me but hopefully I can continue doing it."