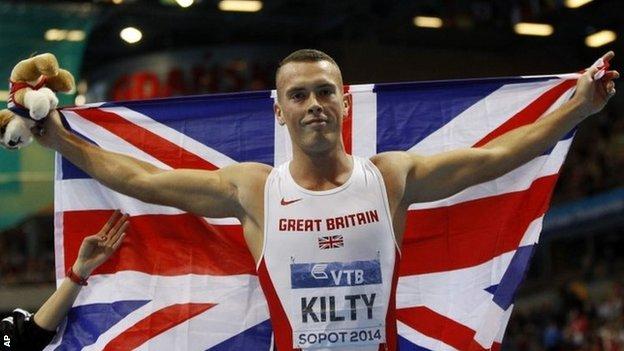 The 24-year-old stormed to a lifetime best of 6.49 seconds in Poland last weekend to claim a shock 60m gold.

It came 18 months after despite running the 200m 'A' standard.

"It's been a crazy journey. I actually won my first national title whilst living in a homeless hostel," he said.

"That was with my parents and four siblings, all sharing one bedroom and there was all sorts going on in that hostel. Things were really tough."

In 2001, Kilty broke the aged-12 UK record for 60m and since then has competed for his country throughout the youth levels.

But was his first senior GB vest as an individual competitor, having previously been named only in relay squads.

After failing to reach London 2012, his lottery funding was cut, meaning he was reliant on his family's continued support.

"I couldn't have become world champion without my parents, especially my dad," Kilty told BBC Tees.

"We didn't have much money and he sacrificed jobs and funded my athletics for a long time - I couldn't be more grateful.

"When I was younger we had a lot of struggles and moved to a lot of different council estates. I just hope I can motivate people on Teesside.

"No matter your background, if you're willing to never take no for an answer and give things a shot, you can achieve your dreams."