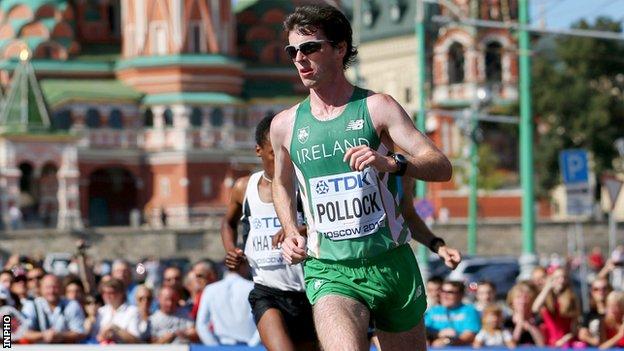 Paul Pollock set a personal best as he was fifth best European when placing 30th at the World Half Marathon Championship in Copenhagen on Saturday.

The county Down man cut one minute and 43 seconds off his previous best set in Bath last month as he clocked 1:02:09 in the Danish capital.

Pollock was the second best European when he finished 21st in last year's World Championship marathon in Moscow.

"I was hoping to break 62 minutes, but taking over one minute off my personal best is a good day's work.

"I've just came out of Athletics Ireland training camp in Portugal and I didn't really ease down" added Pollock.

Pollock wants to run two 10K track races in the US in May in the hope of achieving qualifying standards for both the Commonwealth Games and European Championships.

The Northern Irishman has already achieved the marathon qualifying standard for both the Commonwealth Games and the European Championships.

"I plan to run two 10Ks in Stanford in May and the European Cup in June, then I want to do well at the Commonwealth Games and on to Zurich for the Europeans."

Africans filled the first 15 places in Denmark and the two top European finishers were both born in Africa.