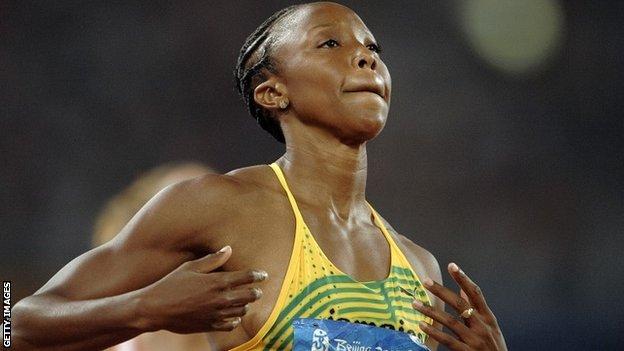 Jamaican Olympic medallist sprinter Sherone Simpson has been suspended for 18 months after testing positive for a banned stimulant.

Simpson, 29, said in January that a supplement provided by her Canadian trainer was responsible for the positive test.

But a Jamaican anti-doping panel voted unanimously that Simpson was "negligent in all the circumstances".

Who is Sherone Simpson?

They were two of five Jamaicans to test positive, with Powell set to hear his verdict on Thursday.

Simpson and Randall's bans have been backdated to 21 June 2013, the date they provided the samples.

They will both miss the Commonwealth Games in Glasgow in July.

Randall, 25, who holds the Jamaican discus record with a distance of 61.21m, tested positive for the banned diuretic hydro-chlorothiazide.

Simpson had previously said that she researched the "Epiphany D1" supplement for up to 14 hours online before taking it.

She had added that nothing "raised a red flag or an alarm bell" but acknowledged that she did not disclose the new supplement on doping control forms.

The 29-year-old was training in the United States and was not able to fly back in time for the hearing.