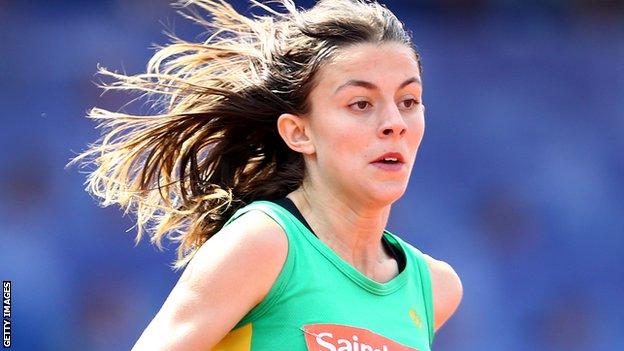 Teenage middle-distance runner Jessica Judd believes she is stronger this year as she pursues a place in England's Commonwealth Games team for Glasgow.

The 19-year-old Canvey Islander emerged on the 800m scene last season, winning gold at the European Team Championships and the Birmingham Diamond League.

"I feel so much stronger than last year," Judd told BBC Essex.

"When I get into these big races I can run well and that will hopefully put me in a position to qualify."

Judd won a silver at the Under-20 World Championships in 2012 and then announced herself at senior level with gold at the European Team Championships last June.

She followed that up by breaking two minutes for the first time in a victory in Birmingham eight days later.

Her season tailed off after the disappointment of not making it through the heats at the World Championships in Moscow and she was then diagnosed with a stress fracture in her lower back.

Now, however, she is fully recovered and focusing her energies on making the England team for Glasgow.

"I'm really hoping I can qualify for the Commonwealth Games. I'm really happy with how my training has gone," said Judd.

"I know there's so much more to do, so I'm not going to rest until I'm in world-class shape."

Judd plans to run at Diamond League meetings in Eugene, Oslo and Glasgow before the Commonwealth Games begin on 23 July, and from September she will be studying at Loughborough University, where British Athletics is based.

"I have something to prove to myself and other people - that I can be on the world stage and compete at a good level," she added.