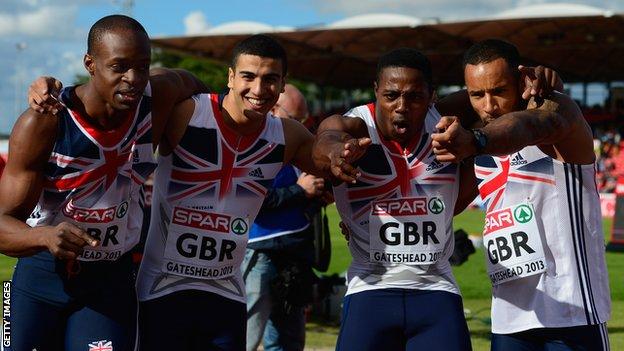 "There were a couple of clashes of egos between the coaches and the athletes in both groups," said Kilty.

"That's the nature of the sport - there are always rivalries, so it's going to happen."

Kilty won gold at the World Indoor Championships in Poland in March and will be making his first appearance on British soil since then when he takes part in the 100m at the BT Great CityGames in Manchester on Saturday.

The 24-year-old did not give details of how the friction started but said there had been "a bit of tension" and "a few words exchanged" at the British Athletics Indoor Championships in Sheffield in February.

"In one group you've got me, Harry Aikines-Aryeetey and James Ellington, who are ranked first, second and third in the country at the moment, which is great," Kilty said.

"And then the other group has got Adam Gemili and James Dasaolu, who were the top best sprinters last year, so it's a massive rivalry."

However, Kilty hopes the differences between the two camps can be settled for the benefit of the relay team, which will compete at the Commonwealth Games in Glasgow and European Championships in Zurich this summer.

"I try to keep it as professional as I can," added Kilty. "They are all part of the British relay team and I think we all need to get along because, if the quickest relay team were to be put out there, you'd have two members of one group and two members of the other group.

"I'm on speaking terms and friendly with the others, but I know there is still tension between the other athletes in our group and their group and the two coaches."

Dasaolu and Gemili will not be competing at the World Relay Championships in Bahamas on 24 and 25 May as the former is building his fitness after a hamstring injury and the latter has university exams.