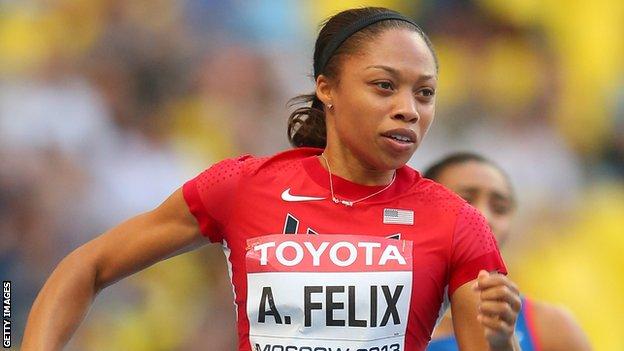 Four-time Olympic gold medallist Allyson Felix made a disappointing return from injury at the second meeting of the Diamond League season, coming fifth in the 400m in Shanghai.

American Felix, 28, had targeted a quick return to the form that saw her crowned 200m Olympic champion in 2012, but was unable to follow the pace in her first race since injuring a hamstring at the 2013 World Championships in Moscow.

Gatlin, Olympic 100m gold medallist in 2004, finished 0.2 seconds ahead of Jamaica's Nesta Carter, while his compatriot Michael Rodgers was third.

What is the Diamond League?

"I know I did a good time but was not thinking 9.92," he said. "I just wanted to put a good race together. I have much more left in the tank, I felt I made it look easy."

Okagbare, 25, also triumphed in the 200m, setting another new meeting record of 22.36 to edge Anthonique Strachan of Bahamas.

"I was just going out there to do my best," she said. "If I execute properly, I wouldn't get less than a win.''