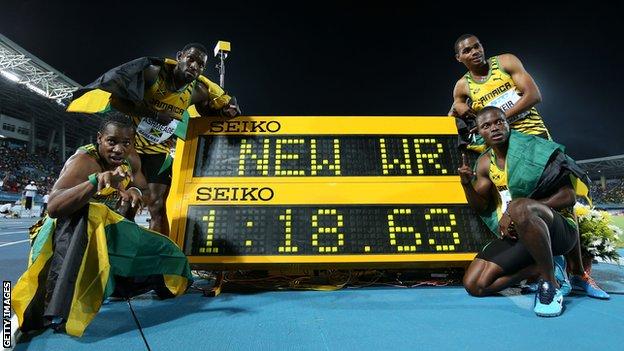 Jamaica's men set a new world record in the 4x200m event on the opening night of the IAAF World Relay Championships in Nassau, Bahamas.

With Usain Bolt recovering from a foot injury, Yohan Blake led home the quartet in a time of 1:18.63 to beat the old record by 0.05 seconds.

Great Britain's women's 4x100m team were fifth in their final, in 42.75, with the United States taking gold.

GB's men's and women's 4x400m teams qualified for their finals on Sunday.

GB's 4x100m men, featuring world indoor 60m champion Richard Kilty and Dwain Chambers, will be hoping for more luck when they race on Sunday, having been disqualified at the last five major championships.

The top eight men's and women's 4x100m and 4x400m teams will qualify for the 2015 World Championships in Beijing.