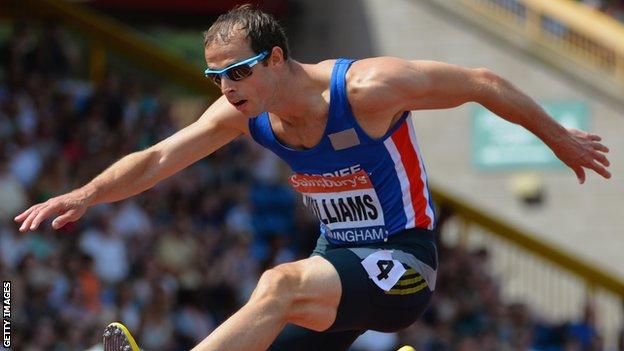 Williams won in a time of 50.00 seconds, another 'B' standard for the 2010 Commonwealth Games bronze medallist.

But Williams conceded his performance was not up to the standards he expects of himself.

"I'm racing a bit tired at the moment," Williams said.

"I've had a virus and if anything I've been training too hard. I think I need to throttle back a bit. There are still two months to go, so there is no need to panic.

"Although I know I'm going to have to be running a full second or more by the time the British Championships come around."

Rival and defending Commonwealth champion Dai Greene did not compete in Cardiff having already qualified for the Games.

Williams was the first Welsh athlete to hit the A standard for the Games when he ran 49.11 seconds at a meeting in Belgium in May 2013.

Carys Parry, who won hammer silver in Delhi four years ago, grabbed another A standard with victory with a throw of 64.37 metres.

Decathlon star Ben Gregory got the better of Welsh indoor record holder Paul Walker to win the men's pole vault with a vault of 5.00 metres.

Gregory already has the A standard in the decathlon as he bids to be selected for his second Games.

Ryan Spencer-Jones secured another 'B' standard as he retained his shot putt title with a best of 17.71 metres.