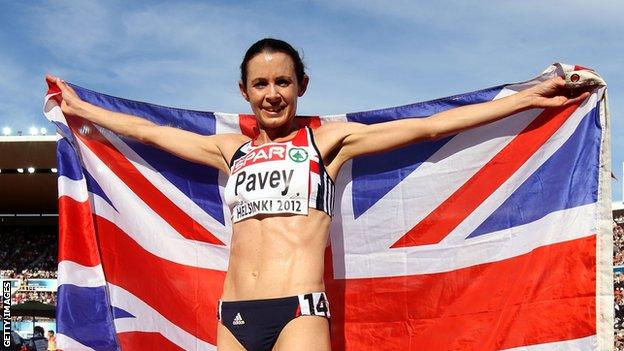 Having a baby is demanding enough but balancing a newborn with being a world-class distance runner is even more demanding.

But that is exactly what Jo Pavey has been doing for the past nine months since she gave birth to her second child, Emily, last year.

The 40-year-old has already qualified for the 10,000m at the European Championships and has fulfilled the selection criteria to run for England at 5,000m and 10,000m at this summer's Commonwealth Games in Glasgow.

"It's very, very busy," she says as she prepares to go for a training run in the sunny lanes surrounding her home in the countryside outside Exeter.

"I don't get a chance to get nervous before training, I just have to get on with it, get the nappies changed and get my kids ready.

As a mum, my kids are always my first priority

"Keeping busy has actually done me good. I feel so happy in my personal life it gives me a lot of motivation and happiness towards my training as well."

Pavey made her major British debut in the 1997 World Championships in Athens and has raced at the last four Olympic Games; her best result coming in 2004 when she was fifth in the 5,000m.

But to get to that standard requires putting in dozens of miles on the road every week, plus the arduous sessions at the track with her husband, coach and chief babysitter Gavin, and two children in tow.

"It meant we had to go to running venues as a family and I had to run with my phone just in case I was needed," she said.

"I didn't know even if it would be possible for me to get back to fitness at this age, it seemed a long way back and I was still breast feeding at the start of April.

"I was training fairly hard, but I think being in that state probably got me really fit because I found it really hard to run fast but I was still putting the effort in.

"Being a mum is my main priority and I've been pleased to be able to combine it with getting back to fitness."

But at an age when many mothers are considering less exercise and more time at home, Pavey has her eyes on qualification for Glasgow in July and racing at her first championship since the 2012 Olympics.

She has already qualified for August's European Championships after winning the UK 10,000m title in her first race for the best part of two years last month.

But how long can she go on balancing being a mother and a runner?

"I don't know how much longer I'll go on," she says with a smile. "For me, as a mum, my kids are always my first priority.

"I'm very fortunate that my husband's very supportive and we very much work at the running together. He coaches and manages me and obviously looks after the children when I'm training.

"I'm still enjoying it, still doing it, but it's got to work for us as a family.

"I've just got to do this year and see what happens from there really."