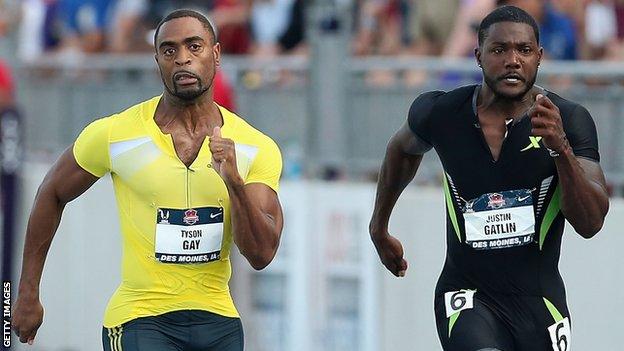 Justin Gatlin says fellow sprinter Tyson Gay will be under pressure when he returns from a one-year drug ban.

American Gay, 31, will run in the 100m at the Lausanne Diamond League event on 3 July, his first competition since he was suspended after testing positive for a banned anabolic steroid.

But Gatlin, 32, who has served a four-year drug ban, warned Gay to expect a lot of attention to be focused on him.

"There's still a lot of pressure on him coming back," said Gatlin.

In an interview with BBC Radio 5 live, he added: "It's not just on you as a person but on your family, your friends and your associates. You've got to live in a different comfort zone now."

Gatlin, who was banned from 2006 to 2010, admitted he was surprised Gay had been allowed to return to competition so soon.

"People have more questions than answers - why his time has been so short," said Gatlin.

The next Diamond League event takes place in Rome on Thursday, and Gatlin will appear in the 100m, along with British sprinters Adam Gemili and Richard Kilty.

Other British interest sees Tiffany Porter in the 100m hurdles, while Eilidh Child competes in the 400m hurdles and Jo Pavey runs in the 5,000m.