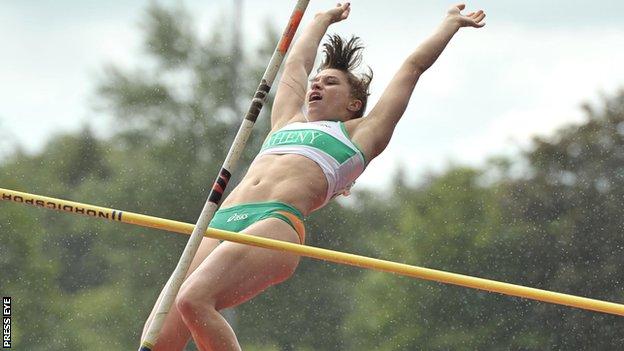 Zoe Brown has booked her place at the European Championships in Zurich in August after improving her Northern Ireland pole vault record on Sunday.

The Antrim athlete's clearance of 4.40m in Athlone added eight centimetres to her previous mark set three weeks ago.

Brown will compete for Northern Ireland at the Commonwealth Games before wearing the Irish vest in Switzerland.

Brown's weekend form at the National League meeting in Athlone was significantly better than American-born Pena, who only managed a clearance of 3.95m when finishing fourth at the European Team Championship First League meeting in Estonia.

Katie Kirk also showed good weekend form ahead of her Commonwealths challenge as she improved her 800m personal best when winning the English U23 title at Bedford.

Another Commonwealth Games representative Jason Harvey also produced good weekend form as he achieved a season's best of 50.86 in the 400m hurdles, which was inside the European Championship standard of 51.10.

Harvey's time was .73 outside his personal best set last year and the Northern Irish athlete will be expecting to break the 50-second barrier over the coming weeks.