Britain's James Dasaolu equalled his season's best in the men's 100m Diamond League in Glasgow to boost his chances of European Championships selection.

Dasaolu, 25, clocked 10.03 seconds in Hampden Park in a race won by Jamaica's Nickel Ashmeade in 9.97secs, the quickest recorded in Scotland.

The Jamaican, 25, pulled up injured and tumbled onto the track before leaving on a wheelchair. 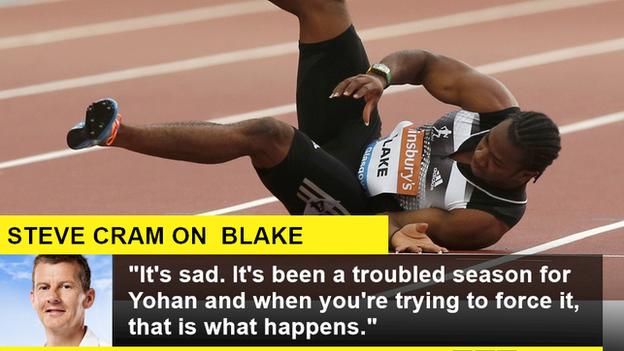 Dasaolu, who is hoping British selectors award him the final 100m spot for August's European Championships, said: "I don't think it was the best of races but I've equalled my season's best in my second race of the season.

"It [selection] is not in my hands. I've done my running, whether or not I get selected I'm just going to enjoy the rest of my season and run a personal best, hopefully."

The Croydon Harrier, the second fastest Briton in history, is not certain of his place for Zurich as the sprinter, recovering from a hamstring injury, did not race at the British Championships in Birmingham, which doubled as trials for Switzerland.

Selectors will decide over the forthcoming days whether to give the third and final spot to Dasaolu or Chijindu Ujah - who has dipped under 10 seconds this season.

Dasaolu will not be returning to the revamped Hampden Park when the city hosts the Commonwealth Games later this month. He has has not been selected by England as he did not race during the selectors' qualifying period.

But heptathlete Katarina Johnson-Thompson will be competing again in Glasgow this summer and she said she had fallen in love with the stadium after leaping to a personal best 6.92m in the long jump.

In front of a 12,000 crowd, the 21-year-old's effort - just three centimetres short of Shara Proctor's British record - was good enough for second, behind American Tianna Bartoletta (6.98m) but ahead of compatriot Proctor (6.82m).

"I was facing a good field, and just tried to come out and grasp the opportunity before the Commonwealths," Johnson-Thompson, who is enjoying a remarkable season, told BBC Sport. "I love this stadium already."

Commonwealth silver medallist Will Sharman equalled his personal best in the men's 110m hurdles, beating a world-class line-up to win in 13.21sec.

Eilidh Child, 27, the leading European in her event this year, finished almost a second ahead of her nearest rival Cassandra Tate in the women's 400m hurdles, recording a season's best 54.39.

"A second at a Diamond League event is a big deal for a heptathlete.

British Champion Danny Talbot (20.44 secs) described the 200m line-up as the best field he had faced and was fifth in a race won by Alonso Edward, 24, of Panama in 20.25 seconds.

Laura Weightman achieved her highest-placed Diamond League finish in the women's 1500m. The 23-year-old British champion was fourth in 4:03.98, behind winner Sifan Hassan (4:00.67) of the Netherlands - who held off two-time world champion Abeba Aregawi (4:00.94).

US champion Francena McCorory (49.93 secs) powered down the home straight to push Olympic champion Sanya Richards-Ross (50.39 secs) into second in the women's 400m, in what was the first sub-50 second 400m run by a woman on Scottish soil.