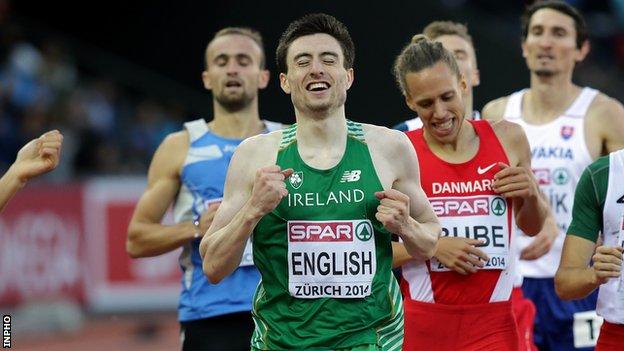 Mark English won a bronze medal for Ireland in Friday's 800m final at the European Championships in Zurich.

The Letterkenny athlete, who is the fifth Irishman ever to win a medal at the championships, ran a season's best of 1:45.03 in an impressive run.

He added: "I've been training for the last few years to get a medal on this stage.

"I changed my tactics because I went too hard in the semi-finals. I knew Bosse would take it out but I had a lot of energy left in the last 200m."

Ireland's Rob Heffernan pulled out of the 50km walk earlier on Friday.

Heffernan was hoping to add the European Championship to last year's World triumph.

The Irish team captain looked to be in the medal hunt at the halfway point but pulled out just before the 40 kilometre mark.

Heffernan, 36, stopped briefly to stretch but then withdrew.

He later went to congratulate France's Yohann Diniz at the finish line for setting a world record of 3:32:33.

The previous record of 3:34:14 had been set by Russia's Denis Nizhegorodov in Cheboksary in May 2008.

Heffernan, from Cork, had been in third place in the early stages of the race but struggled to maintain his challenge.

His Irish team-mate Brendan Boyce was never going to challenge the leading pack, but set a personal best as he finished 16th in 3:51:34.