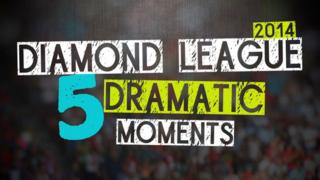 BBC Sport looks back at five of the most dramatic moments from the 2014 Diamond League season, including Kirani James and LaShawn Merritt's photo finish in the 400m in Eugene and Yohan Blake pulling up injured in the 100m in Glasgow.

The British women's 4x100m relay team also feature with their stunning victory in Zurich, as does Mo Farah after he broke the British two-mile record in Birmingham.

Champions League reaction & return of fans survey - are you going to a game?

'One of biggest Champions League nights'