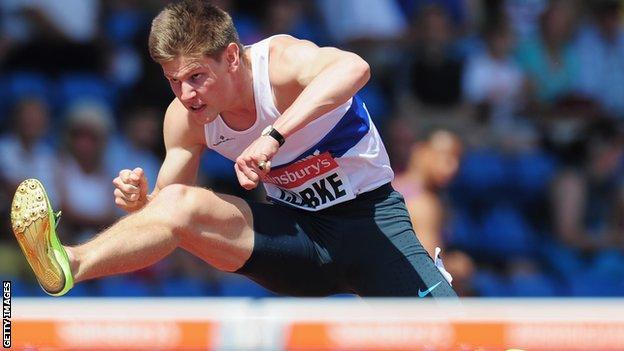 Hurdler Lawrence Clarke says he hopes to put a "demoralising" two years behind him by securing victory at this weekend's British Indoor Championships.

Clarke has twice run a lifetime's best over the 60m hurdles in recent weeks.

His 7.59-second run in France on 7 February makes him the fourth quickest man over the distance this year and favourite for gold on Saturday.

"If you win you get selected for the European Indoor Championships and that's my target," he told BBC Sport.

The 24-year-old has endured a frustrating couple of years since finishing a surprise fourth in the 110m hurdles at London 2012.

A broken wrist and pulled hamstrings ruined 2013, and he had to withdraw from last year's European Championships final after tweaking his hamstring in the warm-up.

"Getting injured before the Euros final was crushing," admitted Clarke, Eton educated, heir to the Baronetcy of Dunham Lodge and, unsurprisingly, labelled the poshest man in sport.

"But I did rehab and nothing else after the Europeans and came back in the winter in a great position.

"Because of the injuries I've had I don't want to give myself any aspirations but, hopefully, if I just keep going on this trajectory I will keep running well.

"It's great finally to be fit and have the opportunity to run. It's 18 months to the Olympics and to be able to start running quickly, building momentum for the World Championships this summer and Brazil next year is really important."

"It's his first senior international year," said Clarke of the 19-year-old Cardiff hurdler. "He's extremely talented and will be nipping at our heels and will, at some point no doubt, overtake us."

Twelve reigning British indoor champions will be competing in the two-day event, with selection for next month's European Indoor Championships in Prague an added incentive.

World junior 100m champion Dina Asher-Smith is set to race in the women's 60m, while Chijindu Ujah - the most recent Briton to break the 10-second barrier in the 100m - and British 100m champion Dwain Chambers will compete in the men's 60m.

Heptathlete Katarina Johnson-Thompson returns to the venue where she cleared a British high jump record of 1.96m last year and will attempt to defend her title.

And 2011 800m European champion Jenny Meadows will be hoping to win her eighth British title at the distance, while world silver medallist Hannah England and world junior 800m silver medallist Jessica Judd will line up in a highly competitive women's 3000m.