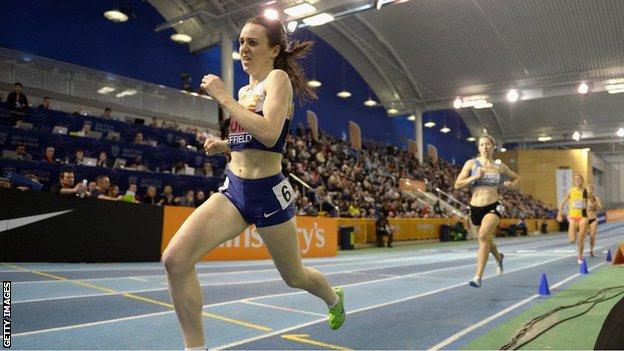 And Zara Asante, Katy Brown and Jamie Bowie each won bronze medals as the medal tally matched that of 2014.

That haul fell just short of Scotland's best ever at the British Indoor Championships - nine in 1995 and 2013.

Muir and Smith are already in the Great Britain team for the European Indoor Championships in Prague at the beginning of March, while Bowie, McAslan and Boston-based Chris O'Hare are also in contention for a call-up.

Muir held off the challenge of Alison Leonard to win in four minutes 13.6 seconds. It was her third British Indoor title after winning at the same distance in 2013 and in the 800m a year ago.

She told Scottish Athletics: "I feel I'm running well. I'd like to medal at the Europeans, I'd really love to get my first major championship medal there.

"I'm hoping to get another good time soon, I'm not tapering for any of my races yet - the main aim this year is the Worlds in August.

Learmonth led from start to finish in the 800m, in which he recorded a time of one minute and 49 seconds, a second outside the qualifying standard for the European Championships.

"It's my first senior national title and I'm absolutely delighted," he said.

"I'm kind of running like I was when I was a teenager. I came on to the scene when I was 17 years old and I was breaking all sorts of Scottish Junior Records.

"The last few years I've been working on all sorts of different tactics. Today I just wanted to run hard from the front. I had a target on my back since the Commonwealth Games which raises expectations."

McAslan kept her nerve when two athletes in front or her tripped on the track with less than 100m to go in the 400m final and she went from fourth to second.

And she summoned up a sprint finish to win gold on the line with a personal best of 53.05 seconds.

She said: "I wasn't expecting the win at all - it was a really scrappy race so it is a big shock but I'm definitely happy.

"I saw Seren (Bundy-Davies) and Margaret (Adeoye) go down and then I just had to make sure I didn't stand on any of them.

"I had to switch back on after that because I switched off for a second but I had to focus on beating Laura Maddox who was in front of me. It was a difficult race - I've never experienced anything like that before in a race.

"I am just outside the European standard, which is 53.00. It's something in the back of my mind."

In the men's high jump, Smith was in superb form as he took the British Indoor title after winning outdoors in 2014.

"I'm glad to be back at home in Scotland training - I'm training happy at the moment. I'm putting the work in so hopefully things keep improving."

Warnock long-jump silver medal was clinched with a 6.37m indoor personal best in her third attempt.