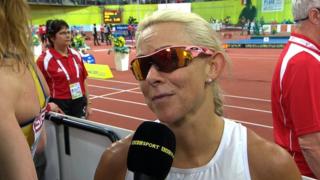 Meadows through to 800m final

Britain's Jenny Meadows initially misses out on a place in the 800m final after finishing fourth in her semi-final at the European Indoor Championships in Prague, but is later reinstated after Russia's Anastasiya Bazdyreva is disqualified for stepping off the track.

Illness hampered Meadows preparation who has struggled with a "really bad cold" and is still "very proud" of her effort.

Switzerland's Selina Buchel won the race with Bazdyreva second before her disqualification and Anita Hinriksdottir of Iceland in third.