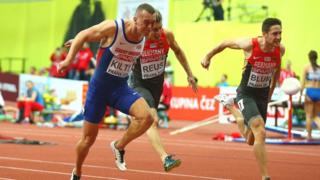 Gold for Kilty as Ujah disqualified

Britain's Richard Kilty wins gold in the men's 60m after Chijindu Ujah is disqualified at the European Indoor Championships in Prague.

Ujah received a red card after false starting, but Kilty went on to record a season's-best time of 6.51 seconds to add to his World Indoor Championships 60m title from 2014.