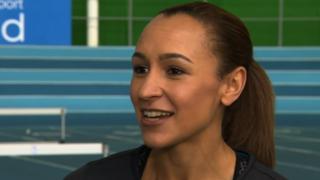 Jessica Ennis-Hill says she will "definitely be nervous" but is looking forward to making her return to competitive action after taking a break from the sport to have her first child.

Ennis-Hill, 29, will take part in her first heptathlon since London 2012 at the Hypo-Meeting in Austria in May and will also compete at the London Anniversary Games in July.

The Olympic champion says her target is to be competitive in 2015 but plans to return to her best and defend her Olympic title in Rio de Janeiro in 2016, and says the emergence of a home-grown rival in Katarina Johnson-Thompson can only help her.