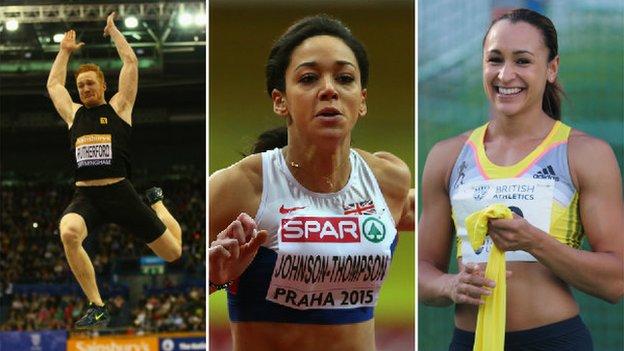 The streets of Manchester will be awash with Olympic and world champions on Saturday as the city hosts the Great City Games.

The star attractions are reigning Olympic champions Jessica Ennis-Hill and Greg Rutherford, but a closer inspection of the list of attendees reveals a number of intriguing head-to-heads to keep an eye on.

The lowdown: Olympic heptathlon champion Jessica Ennis-Hill competes for the first time in nearly two years on Saturday after injuries, pregnancy and the arrival her son, Reggie, caused her to step away from the sport.

The 29-year-old, the poster girl of the London Olympics, has chosen her favourite event for her comeback, but those expecting a winning return should perhaps think again.

Ennis-Hill has been suffering with an Achilles injury of late and will come up against European 100m hurdles champion Tiffany Porter.

British record holder Porter has run 34 of the 35 fastest 100m hurdles times by a Briton and there will also be world champion Brianna Rollins to contend with.

What's been said: "I'll be nervous, it's been a long time away," says Ennis-Hill. "Hopefully I can use that in a positive way. Mentally I've changed, physically I've changed. Having to build your body back up to where you once were is incredibly hard but it's a huge challenge. I do feel a little bit like 'what am I doing?'"

Like Ennis-Hill, the Liverpudlian will face athletes of pedigree on Deansgate.

Eilidh Child won Commonwealth 400m hurdles silver in Glasgow last summer and the Scot will be eager to not only get the better of Johnson-Thompson but also her team-mate Meghan Beesley, who beat Child over the half-distance in Manchester last year.

What's been said: "It's an event where the 100m hurdles for me is too short," says Johnson-Thompson. "I always have to chop down my strides because I'm too tall for them whereas with the 200m hurdles I can just stride out. It's going to be really stiff competition, I'm against specialists and it's not an event I've ever done."

The lowdown: 'The Flying Dutchwoman' Dafne Schippers has become such a force in in sprinting, some suggested last summer that the heptathlete should give up multi-evening to concentrate on the sprints.

Schippers is Europe's fastest woman, completing the sprint double at the European Championships last summer in Zurich where she beat Britain's Williams to gold in the 100m and 200m.

The heptathlete is expected to dominate once more on Saturday, but Williams will be hoping to make a statement in front of the cameras after a breakthrough year in 2014. And let's not forget Dina Asher-Smith, the European 60m indoor silver medallist, who will be lining up against them.

The lowdown: Who said those in their late 30s were past their sporting peak? Kim Collins, the 39-year-old from St Kitts and Nevis, was unbeaten in nine 60m indoor races this year, clocking five of the fastest times of the year and topping the world rankings with 6.47 seconds in Poland.

Third on that night, some distance behind Collins, was Kilty, Britain's European 60m champion.

But while Collins had the beating of the 25-year-old during the indoor season, will he have the stamina and strength to beat his younger rival over a longer distance? History suggests he could, with the former Commonwealth champion beating Kilty in all four of their previous meetings over the distance.

What's been said: "The main thing for me is to be competitive and use it as an indicator of where I am to set a bit of a bench mark for the rest of the season," says Kilty. "We've all beaten each other on numerous different occasions over the years so it will be interesting to see how it goes and who's in form early in the season."