Haile Gebrselassie has announced his retirement from competitive running.

The 42-year-old Ethiopian confirmed his decision after finishing 16th in the Great Manchester Run on Sunday.

It brings to an end a 25-year career in which he claimed two Olympic gold medals, eight World Championship victories and set 27 world records.

"I'm retiring from competitive running, not from running. You cannot stop running, this is my life," he told BBC Sport.

Gebrselassie remains the world record holder at 20,000m and the one-hour race.

He had announced his intention to retire five years ago after injury problems, before returning to racing months later.

Gebrselassie failed to qualify for the London 2012 Olympics but won the Great Scottish Run in Glasgow a year later, as well as his third consecutive Vienna City half marathon.

After completing his final competitive outing in Manchester on Sunday - a race he had won five times previously - he went on to complete the route for a second time with the non-elite runners at an event he said he had always enjoyed.

"I'm very happy to stop here. I knew this was going to be the last one," he said. 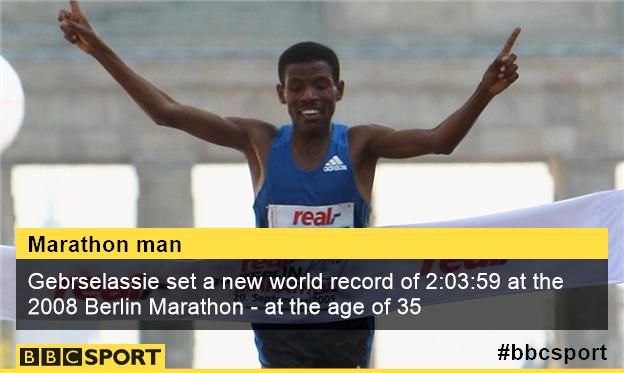 Gebrselassie became a household name in 1993 when, at the age of 20, he won the first of four consecutive world championship titles in the 10,000 metres.

He is a double Olympic gold medallist - in Sydney and Atlanta - and won the Berlin marathon four times in succession.

He has broken 61 Ethiopian national records - ranging from 800 metres to the marathon - and set numerous world records including the 5,000m, the fastest 10-mile run, and the longest distance competed in one-hour (13 miles, 397 yards).

Gebrselassie has been just as successful off the track as on it.

Using the winnings from his athletics career, an early business venture involved building the first cinema in Addis Ababa to show locally-made Ethiopian films. Then he dabbled in real estate, before buying land for a coffee plantation.

Coffee is the mainstay of the Ethiopian economy, the country's largest export commodity, and a lucrative business.

"I believe in action, and running is action," said Gebrselassie. "In business you have to plan and wait. But I learn more patience."

And that discipline and commitment - getting up at 5.30am each day to begin training - is the reason behind his success and why he is respected and admired throughout the world.

Gebrselassie has run marathons in Tokyo and Dubai, New York and Vienna, competed at the top level for more than two decades, and been one of the sport's great ambassadors.

He is a mentor for the G4S 4teen, a programme supporting 14 young athletes from 13 countries.