Britain's leading athletes gather this weekend for their national championships in Birmingham aiming to qualify for next month's World Championships.

As ever, the men's sprints will garner much attention, particularly with Anguilla-born Zharnel Hughes, a training partner of Usain Bolt who has been declared eligible for Great Britain, starting his bid on Friday to feature in Beijing in the men's 200m.

While Britain has a promising group of young sprinters, can any of them bridge the gap to the world's best in time to make an impact at the Worlds?

Twenty-two men from nine different countries have racked up 40 times under 10 seconds - the mark that distinguishes true world-class - between them this year.

Of those 40 times, 23 have come from 11 different American athletes, headed by the dominant Justin Gatlin, who has run the two fastest times in the world this year, 9.74 and 9.75 seconds. 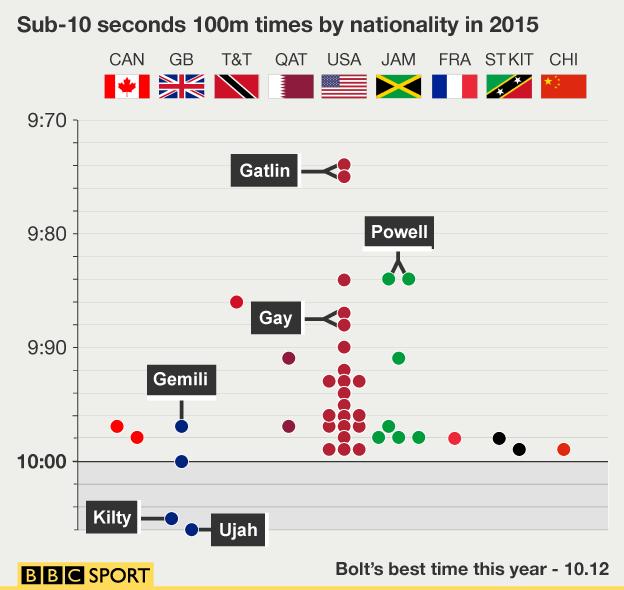 Only one of the 40 has come from a Briton, and that came at a cost.

Adam Gemili joined the sub-10 seconds club in Birmingham last month but suffered a hamstring injury in the process which makes him a doubt for the World Championships.

Gemili has also run 10.00 dead this season, while the next best Briton Richard Kilty, who has run 10.05 this year, will also miss this weekend's championships with an injury.

That leaves Chijindu Ujah, who became the fifth British sprinter to dip under 10 seconds a year ago when he clocked 9.96 at a meeting in the Netherlands, as the favourite.

Ujah's best this season is 10.06, while European champion James Dasaolu, who clocked an astonishing 9.91 in Birmingham's Alexander Stadium at the British Championships two years ago, will need to improve on a season's best of 10.13, with only the top two qualifying by right.

In the absence of Gemili, it would be a surprise if Hughes did not win the 200m comfortably, with no British-born athlete yet achieving the qualification standard of 20.40. 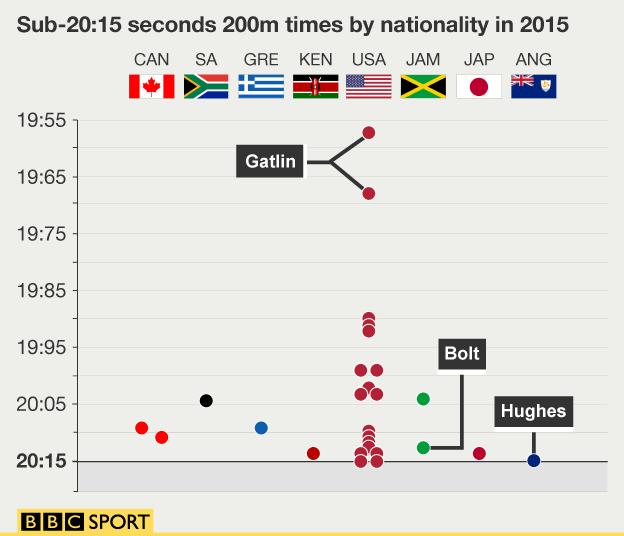 The only GB-qualified athlete to do so, Delano Williams - who was born in the British Overseas Territory of the Turks and Caicos Islands - is not running at this weekend's championships.

But Hughes clocked 20.15 at the same May meeting in the Cayman Islands where Williams ran 20.40, and the 19-year-old also ran 20.32 in running Bolt close at a recent Diamond League meeting in New York.

With Bolt and fellow Jamaican Yohan Blake struggling for form and fitness, Americans have dominated the longer sprint this year.

Twenty-seven of the 41 times under 20.20 seconds have been run by US athletes, but there have only been seven sub-20 second times recorded this season, all by American sprinters.

If Britain's male sprinters - newcomer Hughes aside - may struggle to close that gap in the 200m by Beijing, happily they have at least one emerging world-class performer in the women's sprints.

London student Dina Asher-Smith, still only 19, catapulted herself into that category with her British 100m record run of 11.02 in May.

Asher-Smith, who is studying history at King's College, is also the 10th fastest woman in the world this year in the 200m, with a best time of 20.30. USA's Olympic champion Allyson Felix is the only one to break 22 seconds with a run of 21.98.