Katarina Johnson-Thompson broke down in tears as her hopes of a heptathlon medal at the World Championships in Beijing ended in disappointment.

The Briton finished 28th, her chances effectively ending when she failed to record a score in the long jump.

"This is the last place I wanted to be right now," she told BBC Sport.

Johnson-Thompson became tearful as she finished an interview with BBC reporter Phil Jones after the 800m.

She had to complete the heptathlon in order to be eligible to compete in the individual long jump, for which the qualification round will take place on Thursday.

Johnson-Thompson was in second place, behind compatriot Jessica Ennis-Hill, at the end of the first day's competition.

But in the opening event of day two, she recorded fouls with all three of her attempts in the long jump, as she pushed herself to try to get a high score and improve her gold medal chances.

The final attempt appeared to be good at first, but officials discovered on closer inspection that she had marginally overstepped the take-off mark, and ruled it illegal after a delay of nearly five minutes.

"The jump was measured," she said. "I don't know what it was, but people were saying it was around the 6.85m to 6.90m mark, which was exactly what I needed at that point."

Ennis-Hill won the gold medal with a score of 6,669 points, while Johnson-Thompson finished with 5,039 points. 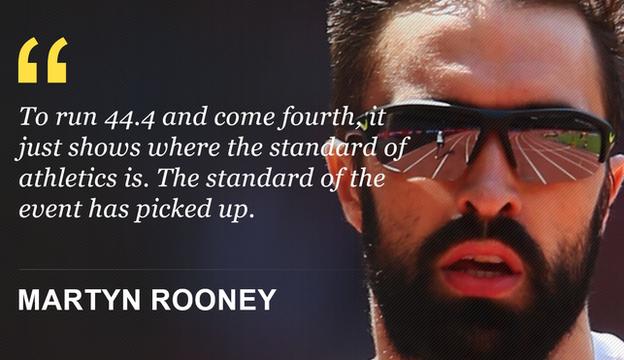 Johnson-Thompson's frustration was one of few negatives for Britain on the second day of competition, with team captain Martyn Rooney leading by example.

Initially omitted from the individual 400m, the European champion proved his worth by breaking his previous personal best set at the 2008 Olympics by finishing in 44.45secs at the Bird's Nest.

Rabah Yousif (45.24) joined Rooney in the semi-finals but Jarryd Dunn (45.49) bowed out, while there was a personal best 54.52 for Meghan Beesley as she secured safe passage to the 400m hurdles semi-finals along with Eilidh Child (54.74).

Concussion ruled Laura Weightman out of the 1,500m semi-finals - a stage Laura Muir progressed from as an automatic qualifier in 4:07.95.

"I came out of this heat really, really well and it was one of my best races tactically," said Scot Muir. "I just need to take confidence in that and then it's just a matter of putting a great race together."

Elsewhere, Niall Flannery (49.17) failed to make it out of the 400m hurdles semi-finals and Nick Miller finished 11th in the men's hammer final with a 72.94m best, while in the morning Tom Bosworth came 24th in the 20km race walk.