Britain's Greg Rutherford once again proved his peerless championship credentials as he added world gold to his Olympic, European and Commonwealth titles.

Only four other Britons - Daley Thompson, Linford Christie, Sally Gunnell and Jonathan Edwards - have ever held all four titles at the same time, but Rutherford deserves that illustrious company after another display of superb jumping under pressure.

The 28-year-old celebrated first with a wild roar and later with tears as his fourth-round leap of 8.41m saw him finish well clear of Australian Fabrice Lapierre's 8.24m and the 8.18m of China's Jianan Wang.

No Briton had ever won any long jump medal at a World Championships, but despite feeling so ill earlier in the day that he wondered if he could even compete Rutherford produced the second longest jump of his life as his rivals cracked under the final pressure.

"I'm a bit lost for words. What an incredible night. It's been unreal," Rutherford told BBC Sport.

"It's unbelievable. This was my best ever performance. The stresses this year, I can't even express to you. I can't wait to get home and see my family."

American Jeff Henderson came into the night as favourite but went out after the first three jumps while defending champion Aleksandr Menkov could manage only 8.02 for sixth.

On a warm night in the Bird's Nest the fast runway again caused problems for the athletes, no-jumps littering the competition and the USA's Mike Hartfield failing to register a single mark.

Rutherford himself fouled in the first round but as his rivals struggled to adjust he throttled back to take the lead with a second-round 8.29m.

It would never be bettered, Henderson and Hartfield ending the night in a tearful embrace and China's Wang, Xinglong Gao and Jinzhe Li unable to control their efforts amid intense and noisy local support.

Seven years ago Rutherford finished an unnoticed 10th at the Beijing Olympics, emotionally shattered after the death of his grandfather and rushed to hospital the following day with kidney and lung infections.

This was some redemption indeed. His Olympic win was derided by some critics on social media as a "fluke" while others have denigrated the distances he has produced for his four wins.

But championship jumping is about delivering when it matters, and Rutherford has proved himself the master once again. 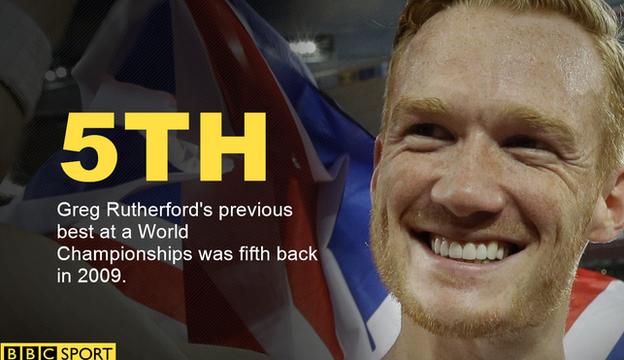 It also comes days after Rutherford criticised UK Athletics for what he claims is a "class system" within the governing body.

"I think 8.41m is a stadium record. It wasn't as long as the last jump which won the World Championships but I couldn't care less to be honest," he said. "I could have jumped further."

Won Olympic gold in 1980 and 1984, as well as the World Championship crown in 1983. That completed the set having secured the European and Commonwealth crowns the previous year.

Still Britain's fastest man, Christie won 100m gold at the Barcelona Olympics in 1992. Victory in Stuttgart the following year secured him the world crown, having won the Europeans and Commonwealths in 1990.

Like Christie, Gunnell too won her event at the 1992 Olympics Games and followed it up in 1993 at the Worlds. A victorious European Championship the following year wrapped it up, having won the Commonwealths in 1990 - a title she retained weeks after victory in Helsinki.

Edwards started with victory at the European Championships of 1998. Olympic gold two years later continued his march, completed with triumphs at the Worlds of 2001 and Commonwealth Games the following year in Manchester.