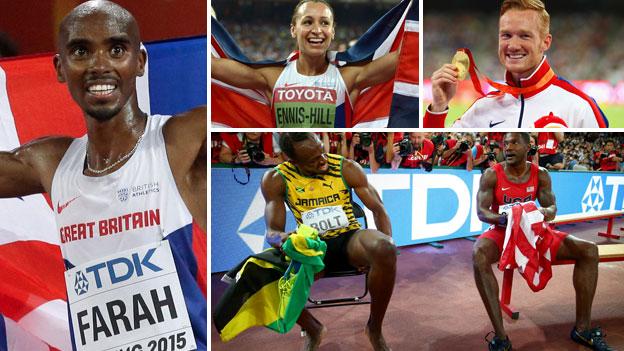 And so a World Championships that began with metaphorical grey clouds over the sport ended with meteorological dark clouds spilling rain across the Bird's Nest and Beijing beyond.

Have these been an auspicious championships, for the sport, for British athletics a year out from the Olympics and for the stars and villains who came to China in search of gold?

The number eight is considered lucky in these parts. So here are the eight ways we might remember the 2015 Worlds.

1. Bolt vs Gatlin - the greatest miracle of all

Usain Bolt arrived in Beijing having run the 100m on only two days all year, having lost much of the summer to injury, with only one 200m race under his belt and that back in May, in a horrible time, with awful form.

Justin Gatlin arrived on a 26-race unbeaten run, as the world number one over 100m and having set a new personal best and the best time in the world in the 200m.

That Bolt left with three more world golds was perhaps his greatest miracle of all. That the twice-banned Gatlin left the individual sprints with two silvers and then saw his US quartet disqualified from the sprint relays allowed the sport to swerve one doomsday scenario and celebrate afresh its finest asset.

This was never good versus evil, as some tried to bill it in advance. Gatlin is a dope cheat, not a serial killer or child abuser.

Neither is it a battle won. Bolt said at the start of the championships that he couldn't save the sport on his own. He hasn't. There were three other one-time dopers in the 100m final alone: Tyson Gay, Mike Rodgers and Asafa Powell.

But Bolt's brilliance acted both as a salve to the sport's deep wounds and a reminder of what it can be: captivating, thrilling and unforgettable.

2. Great Britain gearing up for Rio

Never before have Britain won four golds at a World Championships. Not since Stuttgart 22 years ago have they won more than the total of seven medals won here.

There was brilliance from the old guard. All three of the home gold medallists from London 2012's Super Saturday, Mo Farah, Greg Rutherford and Jessica Ennis-Hill, came back to win gold once again, in Ennis-Hill's case just 13 months after the birth of her son Reggie and nine months after she began her training again with a 15-minute pedal on a bike.

There were familiar faces reaching new levels: Shara Proctor becoming the first British woman beyond seven metres as she won long jump silver and so nearly gold, Sophie Hitchon breaking the British record to finish an impressive fourth in the hammer final.

And there were breakthrough acts - 19-year-old Dina Asher-Smith, who has now broken both 100m and 200m national records this summer; 20-year-old Zharnel Hughes, who ran his first ever major 200m final in between Bolt and Gatlin and could one day cross the line with them; Shelayna Oskan-Clarke, knocking two seconds off her personal best to make the 800m final.

What shape is the team in one year out from the Rio Olympics? On placement points, where eight points are allotted for first place in an event down to one for eighth, GB totalled 94 here in Beijing, their highest since the 95 of the 1993 Worlds.

A decade ago the team came back from Helsinki with a tally of just 35. At the Worlds in Daegu, a year before the London Olympics, they recorded 69.5. There are both winners now and an encouraging depth. And there should be more to come.

3. Getting worse versus getting better

Russia topped the medal table at the last Worlds in Moscow, with seven golds and 17 medals in total. This time? Ninth, with only two golds in a total of four.

These are seismic changes, and with an IAAF commission investigating claims of endemic doping and cover-ups in the Russian federation even as more and more Russian athletes are being given bans, this may just be the start of something good coming out of something rather bad.

Top of the table this time? Kenya, a reward for some fabulous individual performances but also, in this sport at this time, enough to ask the same questions that have been asked of others.

Kenyan team members Joyce Zakary and Koki Manunga were the first athletes to fail drugs tests at these Worlds. Almost 40 Kenyan athletes have been banned in the past two years, many from below the top level, others - like 2013 and 2014 Boston and Chicago marathon winner Rita Jeptoo - from the peak.

4. Return of the champs

It wasn't just Farah, Rutherford and Ennis-Hill who came back with their best.

In total there were 13 successful title defences from individual athletes, the stars out to shine one again: Bolt and Shelly-Ann Fraser-Pryce; Ashton Eaton and Asbel Kiprop; Zuzana Hejnova and Caterine Ibarguen.

Any sport needs its greatest names at their best on its biggest stage. Track and field, after a summer that had seemed to bring only bad news, needs them more than most.

The US have topped the medal table at 10 of the 14 World Championships in the 32 years since the first. Here they have finished third.

The sport's greatest superpower in crisis? Not quite, but there are serious problems.

Only one individual track gold was won. There was still Eaton, the finest all-round athlete in the world and sensational once again in breaking his own decathlon world record.

But many other big names failed to win a medal: Jeff Henderson and Marquis Dendy in the long jump, Dawn Harper in sprint hurdles, Wallace Spearmon in the sprints, the men's 4x100m quartet.

It was summed up on the final evening when a women's 4x400m team containing Sanya Richards-Ross, Natasha Hastings, Allyson Felix and Francena McCorory threw away what should have been a certain gold. Only Felix of the quartet was blameless. Rio will need to see a vast improvement.

6. Rise of new stars and the questions it brings

There was no doubting the finest single performance of the championships: Dafne Schippers powering to 200m gold in an extraordinary 21.63 seconds.

It was a display which outdid even a men's 400m that saw South Africa's Wayde van Niekerk win in 43.48 seconds and three men in the same race going under 44 seconds for the first time in history.

Schippers' was the fastest time the world has seen for 17 years. Only two women in history, Florence Griffith-Joyner and Marion Jones, have ever run faster than the 23-year-old Dutchwoman, who also shattered Marita Koch's 36-year-old European record.

This is a woman who switched her attention full-time to the sprints in June this year having made her name as a heptathlete. She has knocked four-tenths of a second of her personal best in the space of a year, and become the first European woman to win a world sprint medal in 10 years.

Both Schippers and her coach insist that she is clean. Maybe it is a shame that a performance so astounding produces such a response. Equally, the sport cannot claim to have learned from its past if it does not.

7. Hosts not with the most

These were a good Worlds for China and almost a great one.

While Hong Liu's victory in the women's 20km race walk brought the only gold, the hosts won seven silvers and a bronze.

That compares to a solitary silver and three bronzes two years ago and one gold, two silvers and a bronze in 2011.

That more of those second places could not be converted into gold medals kept the atmosphere in the Bird's Nest in check. The stadium, just as seven years ago, looked spectacular. Just as at the 2008 Olympics, the home crowd responded with polite enthusiasm rather than raucous noise. Perhaps London 2012 and Berlin 2009 spoiled us all.

According to reports from the Chinese media outlet Tencent, Poland's hammer gold medallist Pawel Fajdek enjoyed his celebrations that night to such a degree that when he came to pay for a taxi back to the team hotel, he had no money left.

His solution? Give the cabbie his new gold medal, and stumble off to sleep.

Fajdek, sadly, has denied elements of the story, insisting that while the medal had indeed been left in the taxi, it was done so accidentally.

All ended well either way, his medal being returned after a frantic search and the cabbie content with his fare. Gong, but not forgotten.