A senior athletics world governing body figure was planning to delay naming Russian drug cheats in the run-up to the 2013 World Championships in Moscow.

The plan is outlined in an email from IAAF deputy general secretary Nick Davies to Papa Massata Diack.

Diack, who worked as an IAAF marketing consultant at the time, is the son of former IAAF president Lamine Diack.

Davies wrote he needed to "sit down" with the anti-doping team to discuss "Russian skeletons in the cupboard".

The Englishman went on to suggest that "we now need to be smart" about releasing names.

The IAAF announced sanctions against 16 Russian athletes in the four months following the event, which saw Russia top the medal table.

The email, which has been obtained by the BBC and contains a "very secret" five-point plan, was sent on 19 July, 22 days before the start of the 2013 World Athletics Championships, which were held in the Russian capital Moscow.

Another suggestion from Davies was that CSM, the sports marketing firm chaired by current IAAF president Lord Coe, then a vice-president, could be hired as part of an "'unofficial' PR campaign" to deal with negative stories in the British media in the build-up to the championships.

But it is the section on stalling the publication of bad news about Russian doping that will cause the most alarm for an organisation already in crisis.

Davies stressed in the email that any Russians already caught cheating "should NOT" be in the Russian team in Moscow and that this should be made clear to Valentin Balakhnichev, then president of the Russian athletics federation (ARAF) and IAAF treasurer.

"If the guilty ones are not competing, then we might as well wait until the event is over to announce them," continued Davies.

"Or, we announce one or two BUT AT SAME TIME as athletes from other countries.

"Also, we can prepare a special dossier on IAAF testing which will show that one of reasons why these Russian athletes come up positive is that they get tested a lot!!!"

At the time of the email, Russia's suitability to host the championships was being questioned following a series of doping allegations.

In regards to the "'unofficial' PR campaign", Davies singled out the British media for special attention, indicating that was "where the worst of the articles (are) coming from".

He added: "This will require specialist PR skills… but I believe if we consider using CSM we can also benefit from Seb's [Lord Coe] political influence in the UK.

"It is in his personal interest to ensure that the Moscow World Championships is a success and that people do not think that the media of his own country are trying to destroy it."

Davies denies any wrongdoing and in a statement to the BBC said: "As director of IAAF communications it was one of my responsibilities to manage and promote the reputation of the IAAF.

"My email to the IAAF's then marketing consultant Papa Massata Diack, less than a month before the start of the Moscow World Championship, was brainstorming around media handling strategies to deal with the serious challenges we were facing.

"No plan was implemented following that email and there is no possibility any media strategy could ever interfere with the conduct of the anti-doping process.

"I did not discuss these ideas with CSM and there has never been any agreement between the IAAF and CSM for any PR campaigns.

"CSM has never worked for the IAAF in any capacity since Sebastian Coe joined the company."

Last month, Russia became the first country to be banned from international competition because of doping after an independent report uncovered systemic, state-sponsored cheating.

Papa Diack, Dolle and Balakhnichev are among those to have been charged by the IAAF's ethics committee and are awaiting the decision of last week's hearing in London on charges of extorting money from Russian marathon runner Liliya Shobukhova to hide her doping.

They deny the charges but face life bans if found guilty.

Earlier this month, Coe stepped down from a paid ambassadorial role with Nike after the BBC obtained an email which appeared to show his involvement in discussions about the awarding of the 2021 World Championships to the American city of Eugene, which has close links with the sportswear giant.

Coe denied he had been involved in lobbying but, amid mounting criticism over a potential conflict of interest, agreed to relinquish his role and said that CSM would not tender for any IAAF work.

Coe was also called to Westminster to provide evidence to a select committee of MPs looking into allegations that athletes with suspicious blood tests were not properly pursued by the IAAF.

Coe, a former Conservative MP who replaced Lamine Diack as IAAF president in August, denied it was a "corrupt organisation".

The IAAF is bracing itself for the second part of Pound's damaging report, which will focus on allegations of bribery and cover-ups at athletics' world governing body.

In September, Coe, chairman of London 2012's organising committee, appointed Davies as the IAAF's director of the president's office.

Reaction - The IAAF has 'put up barriers'

He said: "I think it's really damaging. It suggests that they've prioritised their own reputation over dealing with the serious issue of drug cheats competing at major championships.

"I think it also adds weight to the argument that has been made against the IAAF that, rather than moving quickly to identify cheats and have them exposed and removed from competition, they have moved too slowly and put up barriers to making that progress."

The relevant sections of the email 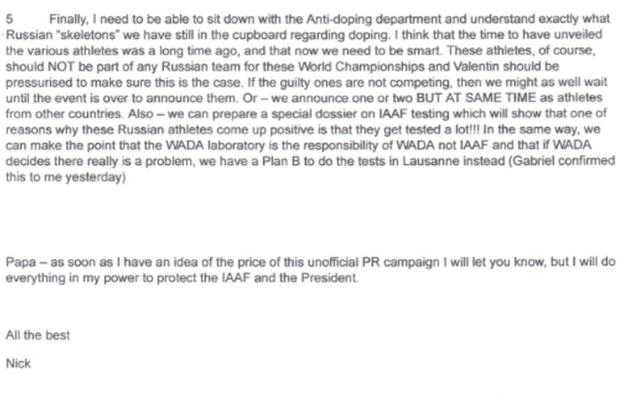