Russian walker Sergey Kirdyapkin will be stripped of his London 2012 gold following a successful IAAF appeal.

The men's 50km walk gold medallist is one of six Russian athletes to have their results annulled.

The Court of Arbitration for Sport (Cas) ruled Russia's anti-doping agency (Rusada) had been "selective" in its disqualification periods.

Australian Jared Tallent will now be awarded the gold and Irishman Robert Heffernan the bronze.

A statement from the IAAF said the governing body was "grateful to Cas for the decisions upholding the IAAF's appeals concerning the cases of six international-level Russian athletes".

It added: "The IAAF will immediately proceed to the effective disqualification of results, re-rankings and re-allocation of medals in all competitions under its control.

"With respect to the Olympic Games, the IAAF will inform the International Olympic Committee of the CAS decisions and request the disqualification of results and the reallocation of medals."

Tallent, who finished second behind Kirdyapkin, tweeted: "History has been re-written... I am Olympic champion." 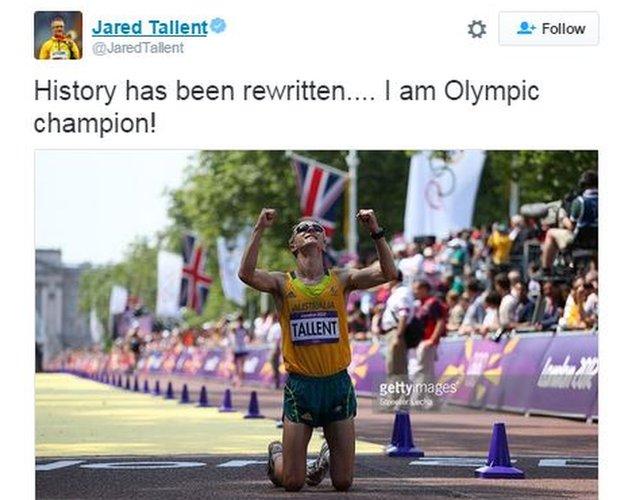 Irish walker Heffernan, 38, said: "I had to read it a few times just in case I made a mistake.

"That makes me an Olympic bronze medallist and it's unreal."

The other London 2012 result affected is the women's 20km race walk, with Cas ruling that silver medallist Olga Kaniskina's results should now be disqualified from August 2009 to October 2012.