Laura Muir is confident her recent good form will stand her in good stead for a shot at a 1500m Olympic medal.

Muir came home in second behind Kenyan Faith Kipyegon, the fastest woman in the world this year over 1500m.

"Being so close to her I think definitely puts me in contention for a medal come Rio," Muir said.

"The girls I was racing are high up there in terms of rankings and the girl who won is the fastest in the world this year.

"I am in that sort of top five in the world at the moment, I was fifth at the World Championships last year, so I just want to keep improving really.

"I'm not sure if 'expect' is the word, I think a target. It's definitely a target to be there (on the medal podium) because, at the end of the day, I can only do as well as I can, I can't control what anybody else does.

"If I feel that I've run the best race that I can and I've given absolutely 100% and I can fourth or fifth then fair enough, there's not much I can do about it.

"But hopefully my 100% will be enough for a podium place."

'I should be able to make the podium'

Muir, 23, believes she will be able to maintain her recent excellent form through to this summer's Olympics and believes, if she does, she can compete with anybody over 1500m.

"You just don't know what's going to happen in an Olympic final, it's very unpredictable. That's 1500m racing for you, but hopefully I'll have enough in the tank for it on the day."

Breaking a record that stood for 22 years is a timely boost for Muir in the build-up to Rio, and bettering the time of Murray, one of the top distance runners in in the history of Scottish athletics, makes the achievement particularly special.

"She's hugely influential and it's just great to be alongside her now and be at the level that she was at.

"She was a great athlete and hopefully in my career I can achieve similar medals and titles as she did. 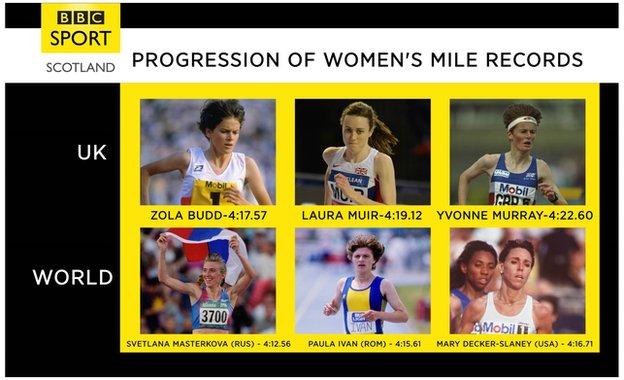 "It's really important to me and I feel really honoured I'm in a position that I can beat these records set by really inspirational athletes before me.

"It's great to have my name up there now it's at the top. It's a reflection of the level I'm at now and the level I'm competing at. I'm really proud of the record that I've got now."

Tommy Boyle, who coached Murray, thinks Muir could go on to emulate her achievements on the track.

"Laura has the most potential of any female athlete I have seen in Scotland," Boyle explained.

"She is right up there with Yvonne Murray, Liz (McColgan), and well capable of meeting and probably beating because she has such fantastic potential.

"But doing times is one thing, running in championships like Yvonne did in Seoul, competing and getting a bronze medal on the minute, on the day, on the hour is what it's all about."

Muir also believes she is capable of breaking Zola Budd's British mile record, which has stood since 1985.

"It's not a common race in the schedule, but yeah, definitely, I think I could.

"It would have been possible to beat the record (on Thursday). It was just unfortunate it got quite a bit cooler.

"Had the conditions been better I think I was in shape to run that sort of time and break the British record."